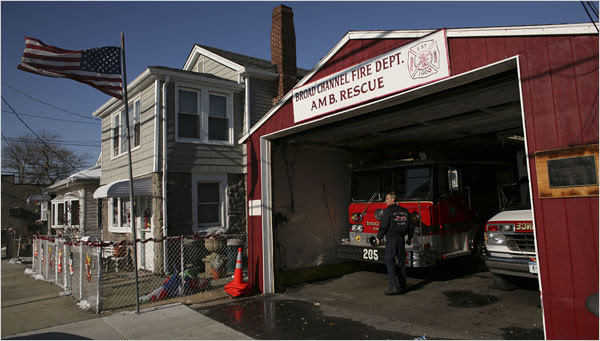 FOR a century, the Broad Channel Volunteer Fire Department has occupied a small red firehouse about 400 feet from the waters of Jamaica Bay, Queens. The building, with one garage door, barely accommodates the department’s fleet of two ambulances and two fire trucks, one of which bears the volunteers’ nom de guerre, “Renegade Warriors.”

In the mid-1990s, the group bought a plot of land on Cross Bay Boulevard, the island’s main thoroughfare, with the goal of constructing a new building that would be part firehouse and part community center.

The volunteers raised a good deal of money for the building, and things began to look especially promising in 2005, when, with the support of Representative Anthony Weiner and Senator Hillary Rodham Clinton, $2 million in federal transportation money was earmarked for the project.

Since then, the leaders of the volunteer firehouse have been navigating the serpentine process of acquiring approvals for the project from state and city agencies. But they say their plans have been blocked for several months by the city.

The Little Engines That Couldn’t

Yeah, the City says it's too expensive. God forbid we should spend tax money on protecting the lives of the public. Much better to concentrate on priorities like this: Res 1686-2008.
Posted by Queens Crapper at 12:37 AM

Bloomberg adminstrator want to control all such activities. No renagade volenteers that steal the thunder from City Hall will be allowed to do good deed especially where Blommberg is not popular.

Not only is the city closing FDNY firehouses due to budget cuts, but it's also using red tape obstacles to impede volunteer firefighters. You can't win either way with this city.

Bloomberg adminstrator want to control all such activities. No renagade volenteers that steal the thunder from City Hall will be allowed to do good deed especially where Blommberg is not popular.

That is pretty much across the board, even with cultural groups.

Ya step out of line and no matter how good your program, short funding and no press coverage!

Allow real estate developers to defer payment of New York City’s mortgage recording taxes on new construction projects until after the construction of such projects are complete.
--------------
CITY COUNCIL IS PASSING THIS WHILE THEY CUT BACK ON SCHOOLS AND FIRE AND POLICE AND INCREASE SUBWAY FARE?