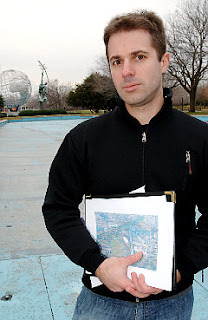 The dormant Fountains of the Fairs - a series of pools south of the Unisphere - would be either ripped up or covered to make way for a large, grassy festival space, according to Parks Department plans.

And while the agency has promised to preserve the World's Fair core, removing the fountains would destroy its essence, said Greg Godfrey, president of the Flushing Meadows-Corona Park World's Fair Association.

"The fairs were designed on axial models based on the history of city planning," Godfrey said. "It helped create order in a very large landscape."

Well we all know that the City of New York doesn't recognize or understand history or good city planning...
Posted by Queens Crapper at 12:12 AM

Queens needs more concerned people
like Greg Godfrey. Our elected officials care the least bit about preserving what history that is left in our borough. Greg-- throw your hat in the ring for City Council--- you have our votes!
Thank you sir for your dedication.

The stunods have it backwards Kevin and want to rip out the stuff that can still work and leave that big algae-ridden toilet bowl. !

Parks are talking about the fountain pools (Pools of Reflections) between Fountain of the Planets and the Unisphere.

It cost less $$ to clean them up the pools and reactivate the pump rooms. The plumbing is still there.
They would need to paint, replace all the stolen water nozzels, pump motor rebuilding.
Who the hell needs more soccer fields !
....What Dummys !

Duh
Benepe such a jackass.
He likley reading another scriped PR statement from that senile old Clarol Clair who gave us the last crock about bird dung destroying the NYS Pavillion.

Benepe didnt even check the facts, he must be a programmed robot.

The only fountain left South of the unsiphere is the old Astrial Fountain by the NYSP !
Its actually a round blue tube with a manifold

as long as they dont put down more astroturf. how can it be bad to put more green into the park? the fountains leak and theonly time they turn them on anyway is for the usopen. once all the douches go back to connecticut the fountains go dry. the park has great museums and sports fields and the rest of it is neglected and ugly. it's about time they make the park more of a park

So now you want dormant fountains instead of grass fields. You hypocrites are just ridiculous.

This is similar to what they are doing to Washington Sq. park in the Village--i.e. NOT listening to the people who live there. "Mike's way or the highway!"

Best way to deal with this is just pave over the entire park and cover it with cheap condos.

a voice of reason.

Same here. While I'd like to see the fountain axis plan preserved, I'd also like to see the Fountain of the Planets either covered, or incorporated into a daylighted Flushing River.

When did Commissar Death and Taxes and his lackey Benepe get religion and now want natural grass instead of artificial turf?

Some notices of intent to sue, perhaps?

Whoever sues will have all sorts of hard evidence that the Commissar knew of the dangers of artificial turf, yet wanted the kickback money from the foreign supplier. Money over life. That's the Dear Leader's operating mantra.

Never forget the phrase: "Kill it" used to order one of his subordinate female executives to abort her newly conceived baby. That was his instantaneous reaction to her happy announcement that she had become pregnant.

Dear Leader is a frightening killer. See Chavez, Mugabe, Castro, as well as his North Korean here, Kim Jong Il (does anyone else here expect to see our own Commissar all decked out in his own khaki military uniform?), Saddam, Stalin, Hitler and all his other "special" people he admires for their success. They are/were all abrupt killers of whosoever was inconvenient.

So, watch. Artificial turf will be used on all this land. It kills. He kills.