Manhattan turf field shut down due to lead 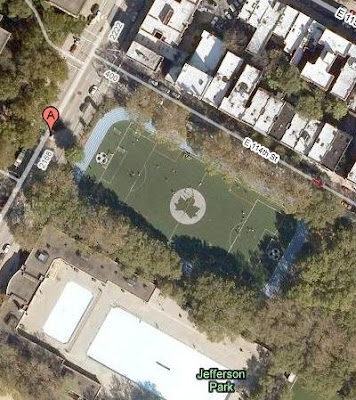 An East Harlem soccer field has been closed after elevated lead levels were detected in the synthetic turf installed five years ago, park officials said Monday.

The exact cause of the lead contamination at Thomas Jefferson Park, at First Ave. and E. 113th St., is not known, according to Parks Commissioner Adrian Benepe.

But Geoffrey Croft, a park advocate and frequent critic, blamed the lead contamination on the city's use of a type of synthetic turf that includes a cushion of pulverized tires, known as crumb-rubber infill.

The field was fenced in and closed Wednesday, although a running track around it remains open. The field will be reopened when the turf is removed and replaced.

Park officials said they began testing Thomas Jefferson Park's fields after two similar fields were closed this year in Newark. Tests on five other fields with the same product came back negative.
Posted by Queens Crapper at 6:32 AM

Theres also been tests done locally in Queens discount stores of toys and home ware dishes etc with professional equipment showing lead in many items.It was a report on abc late world news last night.Who lets or is indebted to china to let this dangerous cheap crap in.Do a search yourself people of the ABC news report.

What conclusions can we make of this news?

Is it that the hard financial times has forced reduced kickbacks to Commissar Death and Taxes and his Toy Boy Lackey, the sniveling Benepe?

Or, has the city been served with papers indicating some class action suit for harm dome by the lead in the turf?

The Commissar and his boy toy have been fully aware of the health hazards posed by this turf from the very beginning. Neither gives a damn about anybody else's health. I believe that their only concern is making money from the manufacturer.

How can that parks rep make such an assertion? Why does it remind me of that liar from the EPA, C. Todd Whitman, who assured us all was safe around lower Manhattan in the days following 9/11. How dare they?!?!?!
ToxiCity, I say.

The lead problem is in every piece of junk toy cheap or not and just about every other house hold item.Its up to the FDA and EPA to not allow these dangerous chemical laden materials.

An article to gander at.One of many of smiliar lawsuits pending.

* Lawsuit asks Mattel to pay for lead testing on children

WASHINGTON — The Bush administration and China have both undermined efforts to tighten rules designed to ensure that lead paint isn't used in toys, bibs, jewelry and other children's products.

Both have fought efforts to better police imported toys from China.

Now both are under increased scrutiny after last week's massive toy recall by Mattel, the world's largest toymaker. The recalls of Chinese-made toys follow several other lead-paint-related scares since June that have affected products featuring Sesame Street characters, Thomas the Tank Engine and Dora the Explorer.
Consumer advocates say the Bush administration has hindered regulation on two fronts. It stalled efforts to press for greater inspections of imported children's products, and it altered the focus of the Consumer Product Safety Commission (CPSC), moving it from aggressive protection of consumers to a more manufacturer-friendly approach.

"The overall philosophy is regulations are bad and they are too large a cost for industry, and the market will take care of it," said Rick Melberth, director of regulatory policy at OMBWatch, a government watchdog group formed in 1983. "That's been the philosophy of the Bush administration."

Today, more than 80 percent of U.S. toys are made in China and few of them get inspected.

"We've been complaining about this issue, warning it is going to happen, and it is disappointing that it has happened," said Tom Neltner, a co-chairman of the Sierra Club's national toxics committee.

But as recently as December, the Sierra Club sued the Bush administration after the Environmental Protection Agency (EPA) rebuffed a petition to require health and safety studies for companies that use lead in children's products. The EPA and Sierra Club settled out of court in April, with the administration agreeing to write a letter to the CPSC that expressed concern about insufficient quality control on products containing lead.

The Sierra Club's interest in lead paint in children's products grew out of the largest-ever CPSC-conducted recall. That action on July 8, 2004, targeted 150 million pieces of Chinese-made children's jewelry sold in vending machines across the United States. Since 2003, the commission has conducted about 40 recalls of children's jewelry because of high levels of lead.
Guo LiSheng, the deputy director of a Chinese global trade agency, warned against "unnecessary obstacles to trade" and advocated international rules that allow some lead content. He added that good product labeling was sufficient.