When will these folks just go away? 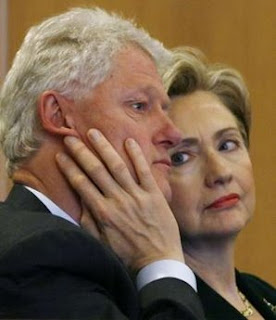 WILL BE GUESTS OF MAYOR BLOOMBERG

Bill and Hillary Clinton will push the ceremonial button to signal the lowering of the giant illuminated ball in New York's Times Square this New Year.

The former president and his wife -- a U.S. senator from New York and President-elect Barack Obama's choice for Secretary of State -- will join New York City Mayor Michael Bloomberg in this year's festivities, event organizers said in a statement Tuesday.

They will push a button at 11:59 p.m. Wednesday night, starting the 60-second countdown that is part of the annual celebration in New York City's signature square.
Posted by Queens Crapper at 10:52 AM

These people, the Kennedys, thats alright.

All they are doing, like the media trumpeting diversity and politicians more development, is digging their own hole.

A large credibility gap is starting to yawn wide in this country and blogs like Crappie are starting to fill the gap.

"When will these folks just go away?"

Avenge Sarah Pailin by Trashing Caroline Kennedy! Blame professulas whose posh pensions graze on stumbent loan interest from vacuous degrees in basket weaving commie nutty organizing. Turn grant grubbing blatherers into fuel, especially perverts like mayor crotch who gas for obsama zbin biden. Your islamosympathic gutterswabbing clothing and pierced privates spread diesease. If you weren't such baby killing, vermin snuggling perverts you wouldn't be driving up our health costs, then collecting disability for your commie nutty organizing dementia. Your passive aggressive labor unions grab our guns, cars (congestion pricing), balls (SONDA), wallets, and homes but we will grab your throats and dang you from trailer bone tolls. Apply Sarbanes Oxley to non-profits! Repeal the seventeenth amendment before any VAT. All the homeless are drugged out hippies. Second Amendment is the ONLY Homeland Security. Wait until we waste all your stumbent subprimes, so you need to sell your affectation glutton art and work instead of diverting tution and Y2K scams to soviet freezeniks! Deport for multiple visits to same country. If you controlled your own pension neither your boss nor the government could abuse it. Lynch soviet wealth fund abbetting aghadhimmic peakies when oil plummets! Parasites complain about salaries but pig out with benefits. Global warming is a grant grubbing extortion racket. Urban sprawl annoys terrorists. Hazards and pollution stem mostly from mandates. Aqua volte! This land wasn't build by bullocraps.

The next step will be to name a bridge after Bubba. And then spend a few million dollars to pay for new signs.

Bill and Hillary Clinton will push the ceremonial button to signal the lowering of the giant illuminated ball in New York's Times Square this New Year.

I'm sure someone intentionally picked them to "push the button" (No!! Bubba!! Not that one, that's the nuclear missiles aimed at China!).

Seems like obvious symbolism, a changing of the guard from Bush to the second black president, Obama.

Anonymous #1: Your lithium is ready.

When it comes to money, its amazing who you choose to sleep with and who gets dissed, eh?

I haven't been quiet. Where've you been? Regarding Monserrate, he should fry. What kind of guy would cut up their girlfriend's face like that? But at the same time, what kind of woman would try to cover it up? Really sad. If I were her, I would get a really good lawyer and see what kind of $$$ she could get off of him.

And secondly, don't mess with bubba.

Not me. Other women tried, and paid a steep price.

Barack Obama. BIG mistake making this witch your Secretary of State. Watch your back, bro.

Best move Obama ever made. She will be the perfect Secretary of State. But of course if you're one of those people who calls Obama the "messiah", you'll hate every move he makes including his picks for his cabinet.

What kind of guy would cut up their girlfriend's face like that?

Central American's that who.
Many cut up their wives faces, say nothing when they get lazy and fat.
...This way no other men want them. Women are personal slaves & reproductive organs to Central American men.

Its just awful how these carpet baggers born and raised in other states can dictate to us as well as pull the switch.

Yes the Clintons.A dissapointment to the left.Thanks for killing millions in Yugoslavia bill.And Madeline Albright said she thought the sanctions on Iraq were worth it even though they starved millions of Iraqi children while Saddam's Bath party supported by the Brits,and CIA in 1968 ate fine and recieved weapons by the U.S. in the 1980's.

"But of course if you're one of those people who calls Obama the "messiah", you'll hate every move he makes including his picks for his cabinet."

Clinton's remarks regarding Putin are a wonderful display of her capacity for diplomacy.

You people are so sick!!! I hope there will be more people like Bill and Hillary Clinton. You guys are just jealous it’s not you.

Why should they go away?

I'd like to know who folks think WOULD make a good Senator to represent NY. I'm not being sarcastic, I'm really curious because no one stands out in my mind.

Bill and Hill suck!
Yes!
But not as bad as Bush and his private gain,screw the public economic plan of spend till its all gone and then start the printing press.Boths sides need critical viewing as much as possible.

So do George and Laura and Rush and Sean and Bill O!!!!!!

Its just awful how these carpet baggers born and raised in other states can dictate to us as well as pull the switch.

New York has always welcomed dysfunctional folks because it is a uniquely disfunctional monied place. RFK, HR Clinton etc now Bloomberg and Caroline hijacking the political stores - we the citizens are being raped - are we blindfolded?


Is Michael Weiner Savage on this board too and has he been hanging out in the Haight again?