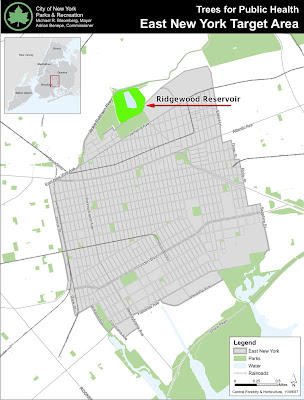 Save Ridgewood Reservoir points out that the Parks Department lists East New York as a tree-planting target on its website, yet wants to rip down thousands of trees in adjacent Highland Park. Apparently Parks was counting on us to be too stupid to figure out that this is just a bit hypocritical on their part.

In another great post, the blog also points out the contradictory statements made by Parks Commissioner Adrian Benepe about the reservoir over the past 4 years or so. Here's a good example:

Mr. Benepe, who expressed both skepticism and surprise at the park's condition when told about it, said the city's plan was: "Let nature take its course. Trees are growing, insects are buzzing, oxygen is being produced, and there's nothing wrong with that," he said.

This battle is causing others to take notice.
Posted by Queens Crapper at 7:48 AM

Adrian Benepe should hand in his resignation already. He is such an embarrassment.

Benepe is no embarrassment to Commissar Death, his master.

And, Benepe is not embarrassed by being a lickspittle lackey for this Soviet developer.

Remember his motto: Some must die so others may profit.

How can Adrianne Benepe's boyfriend look him in the face every morning and not spit in his face.

Then again, Adrianne and his boy-toy would probably find it arousing.