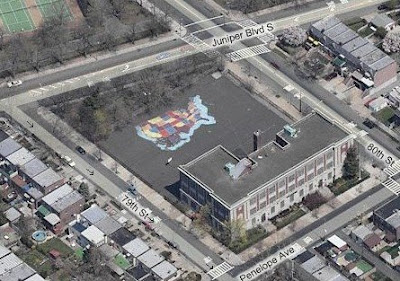 New York elementary schools are woefully lacking in outdoor play spaces, with nearly half of all schools having no playground for recess, and schools in minority communities are the worst off, a new report released yesterday by state Senator Jeffrey Klein finds.

Mr. Klein introduced a bill that would ban the construction of any school without a playground and prohibit current schools from using yard space for any purpose that would result in less room for play areas.

"We go to schools that either have nothing in their lot or have old, outdated, and potentially unsafe equipment," the founder and executive director of Out2Play, Andrea Wenner, said.

Hmmm. Maybe instead of selling city-owned land to developers for a $1 so they could overdevelop our neighborhoods, the mayor should have been building schools with adequate playgrounds. Now we have to build school extensions in schoolyards, such as the one at PS49, above. And partly because of this, the kids are suffering from obesity, so we have to bulldoze forests to provide play areas for them. This policy makes sense.
Posted by Queens Crapper at 12:40 AM

In many schools, kids don't even go out for recess. And gym class is a thing of the past in favor of doing reading, writing and math ALL day long.

Why not use the rooftops as playgrounds?

Look at Astoria. They took a playground away from the Variety Club for development and schools for library buildings.

I guess the feeling is as they are kids of immigrants, playing in the streets are fine.

Afterall, they give that group plenty of lipservice so no one will see the gap between myth and reality.

Most of the people in Middle Village wanted the schools K-8 in PS 49 and PS128. I personally don't think this was a good idea. It took away the children's precious playground..... and let's see what happens to traffic and parking. Pretty soon the "For Sale" signs.

Be careful what you wish for!

PS 113 has a tiny space for outdoor play left. First they took away 1/3 on 1 side for a new building and now it looks like they are taking 1/2 of what is left for another building. Such a shame. :(

I think it's a crime when school officials use former playgrounds for private school employee parking.

I think creating play grounds for recess on the rooftops of schools is the best option as it keeps a safe area for the children versus a ground level school yard which can be littered with broken glass and such, I remember as a child not always having a tidy school yard when at recess. PS 107 has a roof top recess area, albeit a small one. Considering the rising population and pressure on classrooms and the need for more space this is a feasible alternative. Also it keeps the "rifraft" out.

I think creating play grounds for recess on the rooftops of schools is the best option as it keeps a safe area for the children versus a ground level school yard which can be littered with broken glass and such ...
------------