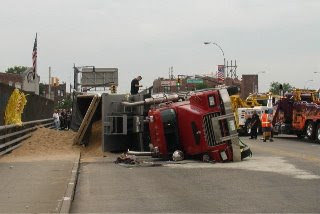 These photos are from an accident this morning on Grand Avenue over the LIE in Maspeth. A truck hauling sand overturned making his turn from the LIE westbound service road onto Grand Avenue. 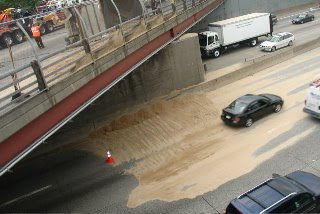 The sand spilled onto the LIE shutting down the westbound LIE.

The FDNY searched the sand for anyone who may have been trapped. As far as I know only the driver of the truck was hospitalized.

Residents and civic groups have complained about the large number of trucks exiting the LIE and clogging the commercial district of Maspeth. Below, Tony Nunziato, local merchant, civic activist and state assembly candidate, at the scene. He spearheaded the effort to get trucks off Grand Avenue 4 years ago. An article about DOT's delay in responding is in the current issue of the Juniper Berry. 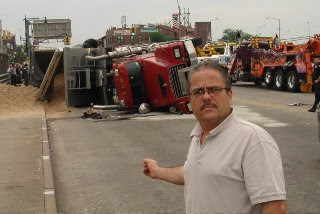 Originally from Juniper Civic.
Posted by Queens Crapper at 11:58 AM

The pink feces strikes again. He ruined his career, but his stupidity unfortunately remains.

Would one have to erect a previously exisitng sign?

The point is that the sign was never there in the first place, so he didn't ask for it to be replaced, he asked for a new sign to be erected to send trucks up Grand when the community was fighting against it at the same time. His action was done out of vindictiveness.

What has Marge Markey done to alleviate the truck traffic problem on Grand Avenue and throughout Maspeth?

Oh! Yeah! She would have to care first, and not be on the payroll of the trucking industry.

Anyway, she's very busy in Albany alleviating the farm animal problems in Maspeth. And, farm animals are, indeed a very serious problem in the district. After all, she's the biggest horse's ass of all.

Looks like the LIE at exit 36 last Thursday afternoon. Instead of sand it was run over illegels who tried to make a B line for the woods. Van packed with perhaps dozen of them and empty budwiser cans hit the center divider.

The whole North Shore was screwed up as they closed the side roads for ambulances. Over 7 cars involved.