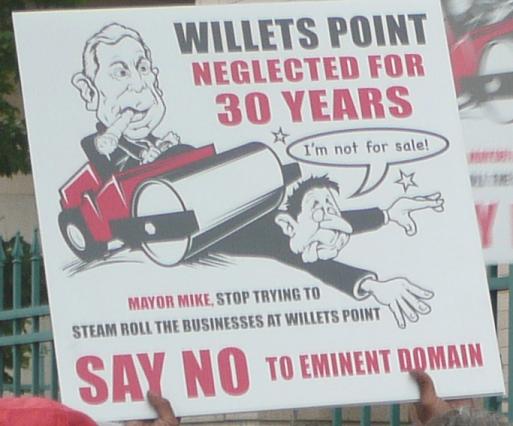 (New York, NY) June 27, 2008 – Willets Point land and business owners along with hundreds of their employees will hold a protest outside Queens Community Board 7 prior to their vote on the City's redevelopment plan for Willets Point on Monday, June 30. They will be joined by supporters from the Castle Coalition and Institute for Justice who oppose Eminent Domain abuse.

The Willets Point Industry and Realty Association (WPIRA), a group of land and business owners who have been operating various industrial and manufacturing family businesses for 30-70 years at Willets Point, continue to combat the City's campaign of misinformation to get approval on the redevelopment of Willets Point without a formal plan or identification of a developer.

• The New York City Economic Development Corporation (EDC) continues to claim that the entire 65-acre site is contaminated and requires environmental remediation. WPIRA owns approximately 45% of the land in Willets Point and many of their sites have already been remediated. It has not been proven that Willets Point needs to be seized and capped with 6-10 feet of fill in order to address contamination.

• Willets Point is NOT blighted, it has been intentionally neglected by the City of New York for decades and former Queens Borough President Claire Shulman is partially to blame. In 1991, at the request of Shulman, The New York City Public Development Corporation commissioned a study of Willets Point. The report stated, among other things that:

- "The area desperately needs a renewed infrastructure."
- "The lack of adequate infrastructure is the most obvious impediment to the success of Willets Point"
- "Willets Point has no sanitary sewers and the few storm sewers that exist are collapsed or perpetually clogged."

Shulman ignored the advice of the experts and the pleas for help in installing infrastructure from her constituents. Because of Claire Shulman's inaction during her tenure as Borough President, the City of New York today intends to spend upwards of $3 billion dollars to redevelop the area during an economic downturn.

• The EDC continues to misrepresent its efforts to relocate businesses. At a Community Board 7 meeting on June 23, Board Member Joe Sweeney reprimanded the EDC for not reaching out to the business owners in a more effective and timely manner. While the EDC has publicly touted agreements, the track record is weak in that after 4 years they have been able to sign a contract with only 2 of the estimated 260 businesses in Willets Point. Furthermore, the contracts are contingent on the approval of the City Council to pass the City's $3 billion redevelopment plan.

• At the moment, the City has no definitive plans to address the impact on increased traffic and transit congestion in the Borough that would lead to virtually stagnant conditions on major roadways in and out of Willets Point and neighboring Flushing. The City's own Environmental Impact Statement (EIS) for Willets Point stated that the plan would create immitable traffic congestion on the Van Wyck
Expressway.

• WPIRA employs over 1500 highly-skilled workers who are paid above-average wages and benefits. These 9 businesses alone generate close to a billion dollars in economic activity and millions in tax revenue for the city.

City Council Members continue to express their disapproval of the City's plan:

• On June 23, 2008, Queens Council Members Tony Avella, Hiram Monserrate and John Liu urged Community Board 7 to vote against the plan.

• On April 21, 2008, 29 New York City Council Members sent a letter to Deputy Mayor Robert Lieber about the redevelopment plan for Willets Point and wrote, "This plan is unacceptable, and we wish to inform you that without significant modifications, we will strongly oppose it, leaving no chance of moving forward."

• On March 13, 2007, Council Member Melinda Katz wrote to Deputy Mayor Lieber stating her previous request that "the certification of the project be postponed until such time that agreements in principle can be reached on the outstanding issues with all concerned parties." Katz requested a postponement of certification to allow the negotiations to continue.

for those who think not to show up and support our friends at willets point your making a big mistake. this kind of crap is getting worse and worse and it must be stopped. the city must realise that you can't blight a section of land for 30 years and then try and profit from your dirty deeds. it's not morally right and its unamerican. any board member who votes for this should have their house condemed and see how they approve of eminent domain then!! SHOWUP & SHOW YOUR SUPPORT FOR THE WILLETS POINT BOYS

Don't give up and don't give in! Best of luck to you.