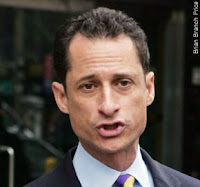 An immigration lawyer supporting a bill that Rep. Anthony Weiner is pushing to give foreign models easier entry is holding a fund-raiser for the likely 2009 mayoral hopeful, The Post has learned.

Political experts said the timing of the fund-raiser, soon after Weiner's bill was revealed, raised eyebrows.

Bland dismissed that, saying he hadn't spoken to Weiner after 2005 until last March, adding, "Quite honestly, I [just] really like Anthony . . . I haven't had any conversations with him [about the bill]."

An aide said Weiner, a House immigration-subcommittee member, has long favored the move, which gives "job preservation" for industries like stylists and photographers, and that he has "many supporters in the fashion, publishing and advertising sectors, part of the creative class that helps create thousands of good jobs."

Rep. Anthony Weiner has sworn off special interest money for his mayoral campaign next year - but he's raking it in for his congressional reelection bid this fall, federal records show.

The Queens Democrat collected $42,500 from unions and political action committees in the last filing period even as he has spurned their cash in the city race, saying, "We need to restore faith in transparency."
Posted by Queens Crapper at 12:53 AM

"The Queens Democrat collected $42,500 from unions and political action committees in the last filing period even as he has spurned their cash in the city race, saying, "We need to restore faith in transparency." "

So, transparency is a virtue that can be turned on or off whenever it is useful?

Weiner is just another sleaze like his master/mentor: Press Conference Schumer.

I agree with Anthony, I think the treatment of foreign models is the most important problem we have to solve in Congress. Fuck the economy, oil prices, national security and the environment: these are all secondary issues. Let's help models first.

Maybe he figures this is his only shot at dating a foreign model.

"Maybe he figures this is his only shot at dating a foreign model."

You hit the nail on the head.

They have to decide between Cynthia Masasi or a tech worker? I think it's a no brainer but hell, if all it takes is legislation to make it easier for beautiful people to enter this country, I'll vote for him through to the Presidency to see it happen.

What the hell do models want him for?

He's got a giant nose on a stupid face.

"Maybe he figures this is his only shot at dating a foreign model."


Actually, a similar statement like this made the Economist Magazine (all the problems we face and he gets world-wide exposure on this!)