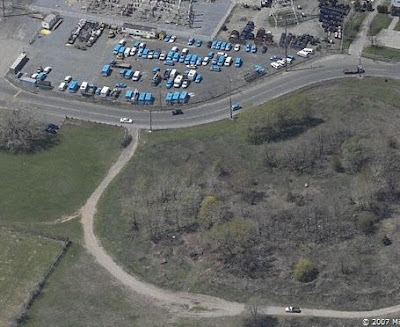 The Coalition for a Better Astoria, a coalition of groups representing a broad crosssection of Western Queens, sounds a call to arms against a developer's plan to bring hundreds of tractor trailers through LIC and Astoria.

A broad coalition of community, business and environmental groups opposes Steel Equities' plan to build a major trucking center in Northern Astoria. Steel Equities, the developer, is planning to build a 200,000-square-foot facility which will bring hundreds of tractor trailers thundering through both Long Island City and Astoria at all hours of the day and night. It is believed that the facility will serve as a central shipping hub for Fed Ex.

The Coalition for A Better Astoria says that Steel Equities' plan is particularly offensive, given that the community has been trying to get Con Edison to sell the entire site to the New York City Department of Parks and Recreation for a waterfront park to create much needed open space. In a survey taken by the Coalition for a Better Astoria, local residents overwhelmingly chose parkland as their first choice for land use. Unfortunately, rather than getting more parkland, the community is getting more pollution.

The neighborhoods already suffer the highest asthma rates in the city and are home to the majority of the city's power plants. The ill-advised construction of a truck hub that would bring hundreds of diesel-spewing trucks through Astoria and Long Island City has left some residents feeling like there is something very unfair going on.

The coalition plans to pursue all legal remedies at its disposal to stop Con Edison from transferring the 21-acre lot to the developer, and to deter Fed Ex from leasing the property until the developer proposes another use which will not bring additional truck traffic through these communities.

Anyone interested in joining the fight against the planned trucking center in Astoria can e-mail the Coalition for a Better Astoria at info@coalitionforabetterastoria.org.
Posted by Queens Crapper at 12:05 AM

An invention by the politicans.

The group refuses to even consider anything else for waterfront parkland, EVEN ELEVEN BLOCKS OF OLD ASTORIA WATERFRONT ABOUT TO BE SOLD next door!!

Its about 5 or 6 people, and considering how inept that community is at organizing to do anything, suspiciously slick.

There are little details of packs of wild dogs on the site, a sewage treatment plant about six blocks away, and about 100 years of Con Ed dumping waste on the site.

I want my kid to play there.

Of couse, is Silvercup wants to build three 50 story buildings, and the Kaufman Studios and 18 monster in the middle of a teeming community, all we need to do for those projects is adjust a stop light or two.

The all full of crap.

Supported by the politicians, indeed. If not, they would be ignored in the press and no politican would show up.

Yet another poorly maintained park.

The offical mouthpiece of the Vallone organization.