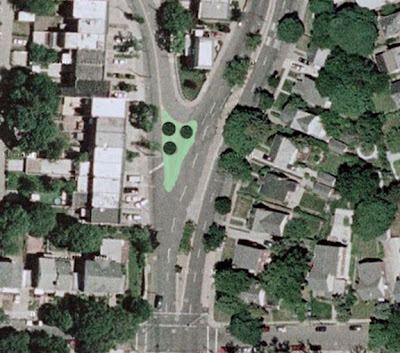 1. The first one is on the junction of Utopia Parkway and Fresh Meadow Lane, where drivers face a dangerous S-Curve. My proposal would straighten the parkway, resulting in a larger traffic triangle, and more park space. 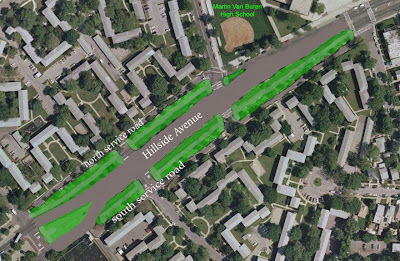 2. The second proposal would turn the widest point of Hillside Avenue near Springfield Boulevard into a parkway. The central traffic island would instead be replaced with an express route. This two block stretch would resemble Eastern Parkway, with bike lanes and benches on both sides. Homes on both sides of the busy avenue would be shielded from the traffic and pollution.

Please note that I am not an architect nor a traffic engineer, just a concerned local resident who wants to improve our city's landscape." - anonymous

Oh, well then the city has no use for you. (Just kidding.)

From Streetsblog: Want a New Public Plaza in Your Neighborhood? Apply Now. Why not submit your suggestions to them?
Posted by Queens Crapper at 12:00 AM

i grew up in fresh meadows a block away from that intersection/triangle.

However, this change does make sense as that triangle has always been quite useless.

There is so much potential for additional park space in Queens, but unfortunately our Manhattan-centric government is ignoring us.

adding trees to the triangle in fresh meadows would make it difficult for cars merging from either FML or Utopia to see one another.

Spend your energy on getting trees on FML instead