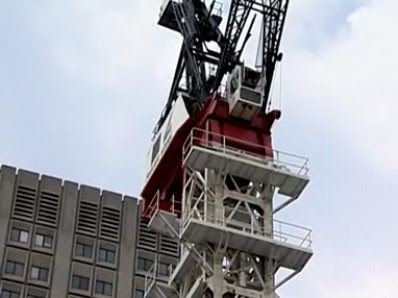 NEW YORK -- A steel worker fell from a fifth floor platform to a third floor setback on Saturday as he was trying to bolt steel, according to the New York City Buildings Department.

The accident occurred at the construction site of a steel residential building at 452 East 23rd St.

The initial investigation into the accident revealed that the man was wearing a safety harness, but it was not properly sealed, said Robin Brooks, a spokeswoman for the buildings department.

The Buildings Department issued violations to Falcon Steel and Turner Construction, the general contractor in the operation, for failure to safeguard. Buildings officials also issued a stop work order for all steel operations as the investigation continues, said Brooks.
Posted by Queens Crapper at 4:50 PM

Notice how the news media doesn't even mention if the worker is alive, injured or dead. Who gives a shit anyway: after all, workers are expendable.

How can a private company do construction work on Saturday (when no inspectors are on duty) in the first place?