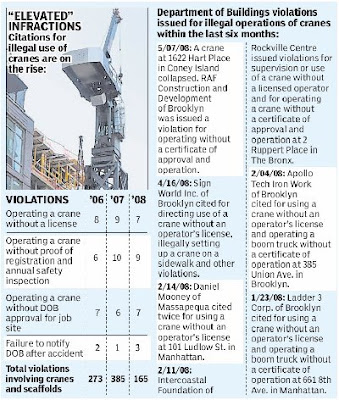 The Manhattan District Attorney's Office is examining dozens of instances of unlicensed workers operating cranes at city construction sites as part of its probe into two fatal crane collapses this year, The Post has learned.

The investigation has expanded to include the Department of Citywide Administrative Services, the agency that licenses the hardhats who run the biggest and most dangerous rigs, said a law-enforcement source involved in the probe.

At least 24 violations have been issued by the Department of Buildings since 2006 that cite workers for operating a crane without a license or an inadequate license, including seven so far this year, DOB records reveal.

The Manhattan DA and the city's Department of Investigation are eyeing the inspectors who issued those violations, as well as the way that all licenses are issued, the law-enforcement source said.

The Daily News reports today that At least 14 crane operators work on construction site despite failing test
Posted by Queens Crapper at 12:11 AM

This will be an integrity test for Manhattan DA Morgenthau.

Morgenthau has always been a club member. Will he once again prove to be as crooked as the other club members? Where are his loyalties?

I think we know the answer.

I hope he's using a glove, there are some dirty assholes in this business.