This e-mail made the rounds of the political blogs this past week. "Oh my God! Ober was just acting like a spoiler and never wanted to win! What sour grapes!" The press had a field day with it, linking to it over and over again, even when they didn't have to.

The truth is that the Ober campaign never sent this e-mail out. How do I know?

- First of all, QC is on the Ober campaign's e-mailing list and is also thanked in the letter. QC never received this e-mail on June 5th or anytime thereafter.
- It wasn't until almost a week after it was allegedly sent out that it was "leaked" to the media by an unnamed "Democratic operative".
- None of the people or organizations mentioned in the letter were copied on it.
- None of the "supporters, volunteers, friends and workers" it was addressed to received it.
- The first website to post it was Juniper Park Patriots at 1:07pm on Wednesday afternoon. Originally, the Patriots wrote that they received a "press release from the Ober for Council Campaign", then they changed it to say it was "an e-mail from the Ober for Council Campaign". They also happen to have the entire thing transcribed... (Yes there are pink fingerprints on this one.)
- JPCA, Christine Wilkinson, Pat Adams at the Forum and this blog all have one thing in common besides geography - all are sworn enemies of disgraced former councilman Dennis Gallagher; none but Wilkinson actually endorsed Ober. Ober would never thank JPCA because its president sent out a personal letter telling voters to choose Ognibene. In addition, there were many leaders and groups from Ridgewood and Glendale who appeared in Ober campaign material but they were not thanked in the letter. I'm sure you are starting to get it - this does not make a bit of sense.
- QC has received many e-mails from Sam Esposito over the course of the campaign and he has never signed anything as "Ober for Council Campaign". He signs it as "Ober for Council" and includes the mailing address, phone and fax numbers and e-mail address of the campaign. He also always writes a subject line and lists the e-mail addresses of the people CC'd and all can see who else got it. 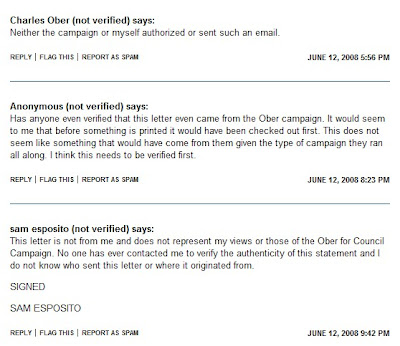 - Charles Ober has stated that this e-mail did not come from his campaign. Sam Esposito says he never sent this out. The blogs that posted it admit that they never spoke with either of them to confirm its authenticity. A perfect example is The Politicker: "I left a message for Esposito and was unable to reach Ober via cell phone. (But who cares? I'll just run with it anyway.)" You'll end up back at the Trib writing about sandwiches again if you keep that crap up, friend!

Daily News, Observer, et al: You've been had. How does it feel to get screwed by the Machine? Now you can sympathize with the plight of Queens.
Posted by Queens Crapper at 12:25 AM

I'd sue the bastard who sent this out. Sounds like a certain lobbying firm we all know and hate might be behind this.

They're really after Ober. The fact that he has half a brain scares Crowley. He pulled votes away from her.

It is pretty obvious to anyone with half a brain that Crowley wants to discredit Ober so she won't have run against him in a primary for the November election.
Reality is that Charles wasn't a spoiler, he was the only legitimate candidate.

Word has it that other party bosses are furious with Jackass Joe Crowley for being arrogant and stupid enough to run his embarrassing bimbo cousin for this seat. He and the party get what they deserve for backing a mornic whore instead of a well qualified candidate.

If Joe & Co. were smart enough to back Ober, he would be the councilman--instead they have to contend with Serph and Fat Tony come November. Stupid.

Another screw-up by Joe Crowley and company.

Did the bloggers from the Juniper Park Patriots' site hack into Sam Esposito's PC to lift this unsent email?

When he's not raping a woman, he's raping someone's privacy.

Are we referring to Gallagher?

Liz, what happened? You said it was a done deal. You said you'd get me a job if I dropped out. But instead, Porky Pig gets elected and I get nothing. And what happened to the BJ you promised me???

Why get things correct the first time? You can just float a rumor out there with nothing to back it up and if you are wrong, you can bury a retraction on page 57 that no one will see.

I won't hide behind the anonymous tag and so expect to be slammed, but here's my one and only comment on the campaign:

While I believe the Ober campaign was (likely unintentionally) destructively unwise, I never got the sense that the candidate would descend to the uncivil level of the letter attributed to his staffer. It seems no more credible than the homophobic hate letter attacking Ober that others have tried to pin on the Crowley campaign, and even the candidate herself (hint: people who deeply hate gays rarely choose FIT and Pratt for their education).

It seem much more plausible that an overly-enthusiastic and ethically empty Republican activist(s?) is having a field day exploiting the passions of political groupies to divide the Democrats. Bloggers and columnists eager for daily topics feed the cycle.

(And while in this I cite Republicans, neither party has an exclusive claim to virtue or sleaziness.)

I believe Ober is a decent man, but it was naïve of him to share a platform with Ognibene to denounce the homophobic letter, especially while it remains of uncertain provenance. Neither Republican candidate seems likely to advance a policy suite that is inclusive of gay rights and marriage equality.

I directly expressed my concern to Elizabeth Crowley regarding her apparent reversal on marriage equality. I understand that the realities of politics in that socially conservative district make some progressive stances untenable. In that case, however, a candidate should simply decline a gay organizational endorsement that carries such expectations.

(For me, the solution lies in parallel recognition: marriage belongs to religion and civil unions belong to the state. Both can be granted at once by clergy invested by the state, or can be granted separately. Some sects would perform gay marriages while others wouldn't and couldn't be forced to, as this would be a violation of religious freedom. This approach would, by the way, resolve our current Catholic contradiction, where straight couples divorce in civil court but the marriage remains alive in the church's regard.)

At this point, allegations of voting process corruption linger, but it's clear Democrats could have won if they'd united at least for the special election. I have no party affiliation and never have, but felt that District 30 had a real chance at smarter development and environmental stewardship under Crowley.

I'm a native of Flushing, lived in Bayside for a bit, and now live and volunteer in LIC (LIC Community Boathouse, community gardening, bike programs, Hour Children, etc.). I volunteered a bit for the Crowley campaign because she's an energetic, smart, and rooted candidate with a masters in city planning and a BA focused on historic preservation. Over-development, traffic (she's opposed to congestion pricing but favors more buses, express buses, and bike lanes) and landmarking are central issues. She also has kids in school, worked as a substitute teacher, and directed an adult retraining and skills-building program. Education is an undying concern in any election.

Crowley's public speaking skills need polishing, and she has improved. But cheap shots reveal more about the shooters than the target. I was often saddened to see people with whom I share core values (children's health and education, local and global habitat preservation, sane development, honorable public service, inclusive and creative urban culture) resorting to a mean-spirited lowness.

Her campaign team did a terrible job of bringing her strengths to the fore, and instead emphasized her family connections and endorsements. I believe that their (perhaps sexist?) approach insulted both the candidate and electorate. If she runs again, I hope her intelligence is recognized for the strong community asset it could be.

I have to disagree with your assessment of Ms. Crowley. She ran 7 years ago, then disappeared, only to resurface a few months before the election. She's done squat in the neighborhood.