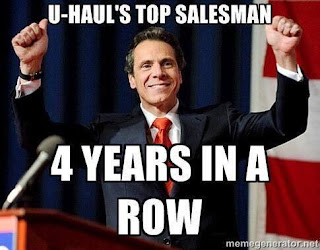 New York over the past year continued to lose more residents to other states than it gained — even as the overall population grew slightly thanks to a continued influx of immigrants, Census data shows.

During the 12-month period ending July 1, the state lost a net 190,508 residents to other states, according to the data. That pushed the net outmigration to over 1 million people since 2010 — the largest of any state, according to a review by the Empire Center, a fiscal watchdog group.

The net loss since 2010 is actually less than the net migration outflow of nearly 1.6 million during the comparable period of 2000-07, the Empire Center’s E.J. McMahon said in the review.

“The stories continue to be a lack of economic opportunity upstate ... and downstate it’s just cost,” McMahon said. “The city and downstate can’t hold people because there’s not enough affordable living.”
Posted by Queens Crapper at 1:02 AM

Who wants NY's population to grow? I guess the people that don't have to leave their houses...erything is filthy and overcrowded in NYC. A lot of people are leaving because of the influx of these new people!!! NY hasn't been fun since the 90's!

So they claim... Does this include the illegals that move into this city everyday? Or how about the thousands of puerto ricans we just took in? Do these numbers account for any of those? How do they really know how many people live in NYC? Just because you either sell a house or a condo doesnt mean that many other people aren't moving into it. It can be 5 illegals moving into that one house for all you know because one person bought the house and rented it out. I dont think they can get an acurate account of every single person who lives here.

With NY taxes already too high, and with the loss of NY sales tax deductibility in the new law passed by Congress, those with $$ will move to states with no income tax, leaving the NY middle class to share the tax burden.

Why stay ? Property taxes are escalating, the job market is very poor as are salaries, and large corporations have left. A lot of people that are buying property in NE Queens are on limited 5 yr visas, then they go back to their countries and someone else buys the property - atleast the honest ones abide by visas laws. I'm on my way out of NY. Its becoming too overpopulated, the transit system stinks, its getting too expensive and there are few jobs that pay a decent/livable wage. Other states are looking more attractive tax wise and job wise. Too bad this is no longer the greatest city.

Dear flock of 'See No Evil, Hear No Evil and Speak No Evil' SHEEPLE:

Once again, you are overlooking (or, simply ignoring altogether!), the big, stinking elephant turd in the room that is stinking up New York State: 'Gargyle Andy,' and the dynastic Cuomo crime family enterprise (of all LEGALLY organized corruption, graft, endless greed, propaganda lies, deniability, cover ups, kickbacks and payoffs), that continues to suck the life, livelihoods, and all pretense of American middle class stability from the hardworking rank and file, as the vicious cycle of selected-and-failed political leadership keeps getting worse by the hour.

Worse, the latest Cuomo psychopath (and his equally exalted Executive Chamber in Albany), have not only absolved themselves, but also 'expiated' themselves from the very crimes against humanity that THEY THEMSELVES perpetrated! But, not to worry, y'all: The crushing weight of elitist, corporate obedient government anarchy will soon destroy everything (and everyone) below it, for a chance to start all over again, ironically with a new breed of dystopian enemies to begin the 50-year cycle of destruction (and, the 'Delay, Deny——And, Hope That You Die' government-hack mantra), all over again (over which to inflict upon, hijack and hold a whole new generation in a holding pattern, in perpetuity).

❝Our society is run by insane people for insane objectives. I think that we are being run by maniacs for maniacal ends, and I think that I am liable to be put away as insane for expressing that. That's what's insane about it.❞ ——John Lennon

So why are we building to accommodate another million people. Oh! I get it. It's to make room for wealthy foreigners to replace the "po" folk. The middle class will be gone with the next generation too.

Recently retired &still trying to convince the bride to leave. Overpopulation, asshole ‘Vision Zero’, a Sandinista for a mayor, a pompous know it all like his father governor, both bucking heads as to who is the most liberal (and the balls to even CONCEIVE they can become President) subways that suck, bike lanes on QB for the 10 bikes and ILLEGAL electric bikes and drivers, far far too much diversity and ‘Queens Values’, I see no reason to stay. (Don’t forget the homeless hotel of the week club) The NYC party is over for the middle class; with the City now, you are either boo-koo rich or big-time poor, often on the government’s tit for life. At least I can still read Queens Crap from elsewhere, but not here. The Fat Lady has sung!

SO sick of this place. I have been looking for work, live in an overrun and overpopulated part of Queens and the NYPD, Mayor and the Governor do not care(and let's not get started on the issues with the MTA that dummy just authorized because he doesn't have to take the subway or a bus). There is so much crap going on here I don't think there are enough enforcers. Oh wait, it's because the illegals that overrun the place are not supposed to be 'harassed' by law enforcement. So there ARE enough enforcers, but they are not allowed to do anything. Had a 911 operator ask me once what kind of people I was calling to report(there was a party, as is every weekend outdoors no matter the weather)And I told her 'the noisy kind. send help!' Even LI is now becoming overrun with these gangs and stuff so there is nowhere left to go but out. That law these passed about the cops not breaking up noisy parties anymore was the dealbreaker for me. The lack of jobs, quality of life and the constant trash, commotion, illegal cars/no license plate cars just getting away with murder and no one does anything was a very close second. We must be crazy to keep putting up with this shit here!

I'm on my way out of NY. Its becoming too overpopulated, the transit system stinks, its getting too expensive and there are few jobs that pay a decent/livable wage. Other states are looking more attractive tax wise and job wise. Too bad this is no longer the greatest city.
------------------------------------------------------------------------------
I always like when this guys posts he is leaving - which of course will make the party cheer cause we know that things always get bad for them when someone shows up thinking instead of parroting what they tell him. So sure, they want those unhappy trouble makers out of the way. So I suspect he doth protest to much - perhaps he is on the payroll of Crowleystan hoping to put the bee in other people's bonnet?

In any case, the rest of the country is pretty much the Wasteland of Trumpland thanks to the Democrat party's policies, so what the hell are you going to do out there? Work in McDonalds, shop in Walmart, have an opioid addict for a neighbor, and to get away from it all, have a beer with a Steve Bannon acolyte. Sure. Go. Report back.

Why the hell do you think all the kids are coming here after college? There is nothing out there, absolutely nothing!

Better yet, instead of posting that you are going to leave, time and time again, just go. This blog is not the place for you.

"Why the hell do you think all the kids are coming here after college? There is nothing out there, absolutely nothing!"

Yep. Dead-on. I am a semi-silent partner in 26 restaurants. We get these transplants in all our locations. They ALL tell tales of drug use, gangs and just plain stupidity "back home" -and none were surprised that a TV huckster won the presidency.

The country is disintegrating and it is a disaster for democracy.

@Anonymous said... "Wasteland of Trumpland"
You left out "deplorables" in your fantasy and who the hell are you telling someone this blog is not the place for you ! You sound like a snowflake who is #triggered by MAGA !

I wouldn't knock knock Trump, did you really want a Clinton II Obama or a Socialist ?
You will get your wish in 3 years when all these immigrants and brainwashed kids in school get to vote.
We are talking cradle to grave socialism, your pensions and Social Security gone, single payer universal healthcare that will make a trip to DMV look like a deal.
The stinking Governor has said on TV "if you dont like multiculturalism, sharing, wanna own gun and believe is some outdated 200+ year old constitution think about getting the hell out of New York, its not the place for you"
Exact words !!!

Deep Deep shit is coming, worse then current Germany and Canada where the jail you for using what they consider politically un-correct words, ship your ass 400 miles in a station wagon when you have a heart attack or something serious.
Is that what you really want, be careful what you ask for

Not U-Haul, Penske. Got out of this shit-hole called NYC, once and for all. Bye, bye city and state taxes in NY. You get zero from me and my family from now on. Good luck paying your pensions when the middle class has left.

I reached my limit. NYC is the "black hole of Calcutta"

My advise to anyone left....LEAVE and do not look back!