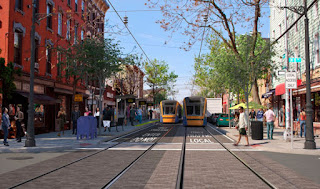 Transit honchos in charge of fixing the dilapidated Brooklyn–Queens Expressway want the mayor to hit the breaks on his controversial $2.5-billion streetcar plan because the two massive infrastructure projects will butt heads.

The Department of Transportation must repair the 1.5-mile stretch of the decrepit roadway between Atlantic Avenue and Sands Street in Brooklyn Heights before the triple cantilever — which runs beneath the neighborhood’s promenade and above Furman Street — crumbles beneath the weight of the thousands of big-rigs that rumble across it daily.

But Hizzoner’s plan to lay 14 miles of light-rail tracks from Sunset Park to the outer borough of Queens that would run along streets in Red Hook, Fort Greene, Dumbo, and Brooklyn Heights, including on Atlantic Avenue, will impact the city’s work on the expressway and cause even more chaos on the local thoroughfares, according to the city’s Deputy Commissioner of Bridges.

“I had a conversation with somebody who was working on the BQX. They are thinking about it going down Atlantic Avenue and across Columbia [Street], and I said ‘Look we’re going to be there, I don’t think it’s a good idea,’ ” Bob Collyer said during a public meeting about repairs to the expressway’s triple cantilever on Dec. 11. “That’s as far as we got.”
Posted by Queens Crapper at 5:17 AM

It is patently absurd and insane that the BQX is still being discussed, but the city didn't ship that stupid trolley car to the Brooklyn Navy Yard for nothing.

De Faustio and his developer donor overlords and their wormtongued lobbyists sound like they want the BQE to implode and the working poor and middle class get out just to build this invasive and incongruous rail line. It's like a civic version of Field of Dreams, except with diabolical people.

The funny thing is that their chosen demo, the hipshit and the tourist, has already arrived in droves and have subsumed most of the areas where this line is built but are suffering from abominable subway service (and now the ferries now too!) as everyone else that has to commute far east and north in queens, kings counties and the Bronx.

But they don't give a shit at all. All they care about is the money these vultures make by speculation alone.

It's going to take some form of divine intervention to stop these passive aggressive lunatics.

JQ, divine intervention: I wish! If God helps those who help themselves, is that a mandate for some mysterious sabotage to befall the damned thing? One hopes...

PS: In FoD, it was, if you'll build it, they will come. Here, they came, and kept on coming on. This is pointless icing on a giant, pointless, frosted-glass cake. Ugh.

Well we can have a choice here people.

We can blame the Mayor and have it the BQX in our backyards because its really city council that votes for it.

Or you can put your big boy pants on and blame city council and not have the BQX in our backyard.

Of course you don't have the cohenes to stand up to the real culprits so you will have no one who will listen to your bellyaching, as is so typical of Queens, and you will have plenty of time to think about it as you sit in the tunnel going into the city while people who do not even live in NYC today will have excellent transportation.

Delay it long enough for term limits to kick in, or were they rescinded when Bloomberg ran for the 3rd term?

Do they really think that the mayor will prioritize the very drivers that he hates and wants to be rid of, over wasting our money on a boondogle for his real estate buddies?

As for bellyaching here. It's not totally a waste of time and effort. In fact it's not at all. Just ask Danny Dromm.

apparently the irony of criticizing local people commenting,critiquing, and yes, sometimes just complaining about local issues on a website devoted to that is very much lost on Mr. Big Boy pants. I bet he just springs right into his trousers every morning, unlike us mere mortals.

IMPLYING WHAT? THEY ARE UNDER ARREST IN A LOCK DOWN UNTIL THEY VOTE HIS WISHES. TRY MAKING ANY OF THOSE #$%*# DO SOMETHING THEY DON'T WANT TO. DO NOT APOLOGIZE FOR THEM. THEY LIVE UNDER THE RADAR.

Actually bellyaching can be useful. I wonder what effect Queenscrap bellyaching may have had on the very close Holden/Crowley race.

Rumor mill is this is maybe a way for the dope from park slope to back away from BQX, but he keeps talking it up as if it's definitely going to happen despite the endless amount of people who quite literally cannot stand this project.

We don't need a trolley into Queens. Just another legal way to block bust.