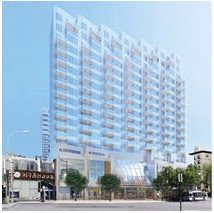 According to Assemblyman Ron Kim (D-Flushing), the latest plan to develop the derelict RKO Keith’s Theatre in Flushing is extremely dangerous.

The lawmaker sent a letter to the Federal Aviation Administration earlier this week, saying the height of the tower planned by Xinyuan Real Estate would be a hazard, given the location’s proximity to LaGuardia Airport. The proposed building would be 210 feet above mean sea level, according to Kim.

“The FAA has concluded on several prior occasions ... that any height at this location exceeding 195 feet above mean sea level would result in a substantial adverse effect, and warrant a Determination of Hazard to Air Navigation,” the lawmaker said.

In the eight aeronautical obstruction evaluations made by the FAA for Xinyuan’s plan, the agency found that none were hazardous, Kim pointed out in the letter. He said that they “were still approved despite being for points that are 204 or 210 feet above mean sea level.”

Xinyuan did not return a request for comment about Kim’s letter prior to the Chronicle’s deadline. The FAA declined to comment.

“The proposed building in question will be directly in line with incoming flight paths. In December of 2004, a Boeing 757 mistook the hazard light on top of a building in the same neighborhood for the start of a runway,” Kim said. “If a 210 foot building is actually built at this location as a result of these eight obstruction evaluations, the lives of countless constituents in my district would be put at risk.”

At the end of the letter, the assemblyman urged the FAA to “re-evaluate” the obstruction evaluation studies conducted for the planned tower.
Posted by Queens Crapper at 12:10 AM

One story will be removed, and the assemblyman will be a self proclaimed hero.

The monstrosity will rise up without any hindrance...

FAA is a Federal agency. Kim should contact Senator Schumer and Congress Member Meng. Also, what does CB7 has to say about this?

Excerpt quotes Kim's letter as saying the FAA itself didn't see any issues when evaluating the site 8 times prior?

Seems like an oblique way of trying to tamp down on the height of anything on the northern side (facing south) of Northern blvd...dunno how that'll really pan out.

If you walk around those parts north of Northern, along Linden, but before your hit the theater at Ulmer, you can still see nice big old manses, now sandwiched improbably between warehouses and the like. But to my eyes in the former things that look more out of place and ugly - no proper upkeep.

In terms of "cohesiveness" of neighborhood character, I'm not terribly worried -- Linden Hill, Murray, etc most subsections just a bit beyond Main street, Roosevelt, and Prince are wide-open and and firmly, solidly single-family residential. This was decidedly cemented by the Koreans, who have a lovely middle-class suburbs of sorts out there. Kim might be just trying to set a border-post of sorts to mark off where the development should ebb, but it's really going to stay clustered the LIRR and the 7 for a variety of reasons, no matter how much outside Chinese developers agitate for density-spread. Most residents along the Northern blvd corridor don't even bother to shop in Flushing - they've got a complexes more suited to them popping up frequently, none of which goes over two floors, and most with drive-ins. It's a different landscape, and culture, out there, and firmly in the hands of people with no interest in seeing it change (right now).

Any Developer has got to be out of their mind to get involved in this property by now.

More to this than meets the eye.

I'm guessing the developer has yet to make a campaign contribution to the Assemblyman.

So how come with the previous (was it 4 owners since Tommy Huang) that it was approved at the same height? Letters were sent before to the FAA regarding the danger.
No problem with anybody and it was OK to build.
Maybe Ron Kim is just blowing his own horn to get re-elected
He's been silent all along regarding the Keith's and other over development projects. How come now he's hot on the pants so suddenly?
Politics is politics and politicians are more than shady who practice their craft in Flushing. His wife couldn't defeat the incumbent do nothing Peter Koo in her attempted run for city council.
Maybe this is Ron's way of pissing on the parade. He's pretty much powerless anyway.

LOL! And I say I'm gonna win the lottery.
It will pass to another buyer and maybe some more money gets laundered in the process. Eventually it will crumble and get delandmarked.

And what are Rom Kim's objectives for the Keith's besides saying no to the building?
Hmmmmm....just blowing wind, no doubt.
He's a rather invisible Dem party stooge and needs publicity....uh....maybe to run for city council? Waddaya think?

So Kim wakes up after other groups have already written letters years ago to the FAA. They all got a "NO" it is safe. How come CB7 isn't concerned?
The same goes for Koo and Stavisky!
What a bunch of Dem machine ass kissers!

The FAA will be introducing dispersal patterns from runway 13 in the next few years, so they say. It's part of the northeast corridor improvement project. It will
Further condense already jam pqcked airspace.

With a potential new runway at rikers and an end to the perimeters rule, lga will be home much larger aircraft, flown closer together, and more often on the TNNIS route that has already permanently changed NE Queens.

Enough is enough. Kim did the right thing.

Ha! - if they replaced the Keith with a tennis stadium, the planes would have to fly over somewhere else, right? That's the "Dinkins Rule".

I do not get this, there is a tall tower across the street from the site of the RKO being built. Used to be a small hardware store and the city has no issue with those guys putting up a tower. I guess the right folks did not get their bribe money.

Where is Congressmber Grace Meng? She is so "hot" on the cause of Flushing history. BTW....the entire Keith's site is on the National Register of Historic Places. In the pig's eye! Meng doesn't give a crap! And her father , former Assemblyman Jimmy Meng is a convicted felon. He carried $80,000 in a gift fruit basket on behalf of someone seeking to bribe a judge. Nice....huh?

Kim did the right thing to advance his career and nothing else. And his wife is on the real estate business! So, go figure'