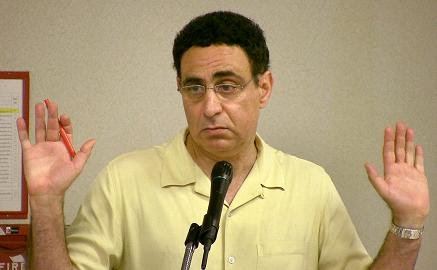 A post from last Tuesday on the blog Queens Crap pointed to how even though December is not listed as an exception to the charter rule, Community Board 7 did not have its regular meeting with a public hearing during that month last year or the one before.

Although the agenda for November’s CB 7 full board meeting said the next one would be in January, the advisory council has set up a meeting for Dec. 18.

Board Chairman Gene Kelty told the Chronicle that though the board did not have a full meeting last December or the one before, the members weren’t ignoring any major issues in the district.

“If we didn’t have a meeting then it meant that we really didn’t have anything on our agenda,” he told the Chronicle.

Now you can put the RKO on your agenda.
Posted by Queens Crapper at 12:12 AM

Pledge of allegiance to the flag of our country, with great reluctance.

Very good. However the meeting will last about 14 seconds.
These people need to be shown the door.

All hail QueensCrap for having the chutzpah to call out Queens Community Board 7 for its repeated failures to abide by the City Charter and other corruption. For all the pompous boasting done by its chairman Gene Kelly and vice chair Chuck Apelian about how terrific their community board supposedly is, the truth is that they can't even keep the board in compliance with the law without prompting from outside. Not even the "long time" board members who are there due to no term limits (as Kelly and Apelian also support) did anything to ensure that the board would hold all of the legally required meetings each year. Time to clean house at the CB7 leadership. (This does not include the District Manager or her staff, who are not to blame.)

Cb7 got caught trying to pull a fast one on the community that they don't care about. Why would you expect them to be anything other than Shady being led by conehead Paulie. I don't know how this community voted him back into office but I would really look into that voting count. When I went to vote there was only one person sitting at my table not the regulation one Democrat one Republican.

Typical bureaucrat answer. 'We weren't doing anything wrong but we will do it the right way now (that you caught us).'

Queens Crap is a local force !

Some of you need to go to community board meetings and civic meetings outside of Queens - you will see the difference greater than say Alabama and Iowa.

The civics and community boards in the other boroughs actually do the work for the communities and are not filled with arrogant little puppets full of themselves.

Queens is the Alabama of NYC on so many levels.

Queens Crap called out those lazy phony CB7 bastards and caught them with their knickers down!
BRAVO!

GET RID OF ALL COMMUNITY BOARDS.
They have no real power and only eat up tax money to sell us out.