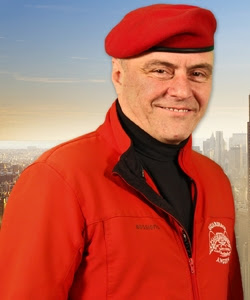 Sliwa, who also hosts a daily radio talk show, is set to call Wednesday for a public referendum to eliminate the advocate position and have the City Council speaker elected by voters, not the council members.

With no oversight or subpoena power, “it is clear by now that the public advocate position has just become a taxpayer-funded method to run for mayor of the city of New York,” Sliwa said.

Making the council speaker a publicly elected position would take the power away from the party bosses who currently control the process, he said. Sliwa added that the speaker should also have increased oversight functions.

By law, the council could vote to put the measure on the ballot or the mayor could appoint a charter revision commission to do it.

Doubting that will happen, Sliwa said the state Reform Party and its allies are prepared to try to collect the necessary signatures needed to put it up for a citywide election.
Posted by Queens Crapper at 7:07 AM

Very very good. Sliwa has been very laser like spot on with the civic issues. This comes after Lou Flores recent report on Dem Machine Tyrant Crowley's vice grip on the speaker appointment process (for lack of a better term) and how how are electeds are sopping to him.

Makes no sense for public to vote for a speaker. No legislative branch does this anywhere. It just makes sense the council members vote for their leader. What next? Union leaders voted by the public and not the members? The speaker rules with a majority vote of the members. If you have a speaker whom the council does not support nothing will get done.

I agree with getting rid of the Advocate post but since Big Bill came from there he won't sign off. Plus the council won't let this see the light of day since this offers one of them a new job once the term is up.

If it passes in a referendum, the council has no say in it.

Since the Public Advocate takes over as (Acting) Mayor if anything happens to the Mayor, the charter will need to be changed so that the people vote for a complete ticket (Mayor + Deputy Mayor) - otherwise, would an un-elected Deputy Mayor would take over? Or a City Council speaker who was only elected by his/her small council district?

I don't think you understand the power dynamic of the Council. The speaker appoints committee chairs, sets the general meeting agenda, and doles out discretionary funds. His power to shape what bills can even see the light of day of the Council's debate, let alone vote, is substantial. The other members do not have any significant power apart from the speaker's discretion, even collectively, except for their votes on bills at the general meeting, which is why they form various caucuses to try and bring a countervailing bloc. The position is usually (maybe always) held by a Manhattan rep because the outer borough bosses use it as a kind of truce toward the greater competition they have with each other than with the "central" borough.

What is really needed is to collect signatures for a referendum for term limits for Albany pols.

What is the process for citizens to place a referendum or charter amendment on the ballot?

It's clear that ALL New York State public elected's are ALL PAY and NO WORK, and have been for a century or longer!

That's why New York State government is responsible for the largest exodus out of this ungodly state or errant government fail, and soon it will be inhabited by a toxic cesspool of the richest raw sewage that money can bribe!

How laughable for 'Gargoyle Andy' (of the lethally dynastic Cuomo scourge), when he delivered his 'State of the State' speech earlier in January this year, exhorting: ❝Our people still lack trust in government and for good cause. And, the government must do more to earn trust,❞ when ironically it is Cuomo himself who is at the rooted core of all NYS corruption, graft and greed in the first place (especially after he lied about accepting the nomination from the 'Independence' Party, after a Daily News reporter asked him about it, and then lied to said reporter by telling him that the decision to accept the nomination will be somewhere down the road, when he had already accepted it, followed by his abrupt termination of the Moreland Commission at the EXACT time that they were preparing to investigate Andy Cuomo)! And, as egregious and unconscionable as those two transgressions look, the Cuomo dynasty of propaganda lies, deniability shame, dishonor, disloyalty, kickbacks, payoffs and cover ups (all of which have completely betrayed flag, state and Constitution), began LONG before big nosed Mario's son was passed the royal scepter to governorship, for which We, the People have never stopped paying a soul-crushing price!

And, the pubic be damned (again and STILL)!

P. S. It's a good thing that Hollywood and BrainWashington, D. C. are finally collapsed by sex scandal and massive cover ups, because New York politicians are up next on the rusty guillotine!

How ambitious! Does he intend to sell all of the REBNYs into slavery or put out some hits? LOL! Good luck Curtiss!

Slow as has some huge ego!
What happened to his intended run for Queens borough president? He couldn't even manage that. Stick to your talk show where you can do the most good to reform NYC.

Why eliminate the public advocate? Make them work for a living instead. Give the public advocate control over the Department of Investigation, which should not be run by the same administration it investigates. Give them subpoena power too. A Public Advocate with teeth would be able to keep any Mayor and their bull in check. (Which is precisely why it will never happen).

Now Crowley is going to control the city council