Jamaica woman is fed up with homeless harassers 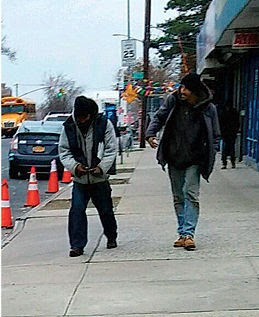 Jamaica Hills resident Donna Thompson told Community Board 8 last Wednesday about a “gang of homeless men that have taken over my neighborhood.”

Thompson, who lives near the Grand Central Parkway service roads’ intersections with Parsons Boulevard, says that one of the men approaches her regularly.

“I shouldn’t have to get off the bus and be afraid to go into my home or walk two blocks around just to get to my home,” she said.

The Jamaica Hills resident said that the homeless men leave “bottles of feces” on her neighbor’s yard and “leave their carts on other people’s yards.” She added that the men panhandle and “leave trash all throughout the neighborhood.”

She added that she lives with her 82-year-old mother, who suffers from dementia.

At the same CB 8 meeting, NYPD Assistant Chief David Barrere, the commanding officer of Patrol Borough Queens South, addressed the board. He spoke with Thompson privately at the meeting.

The Jamaica Hills resident told the Chronicle that a few days later last weekend, a sergeant working under Barrere called her about the situation. As a result, a police car went to the area last weekend, according to Thompson. She added that the NYPD has since told her that the department is “working on it.”

Thompson said in an interview that while she is glad the police have responded, a different kind of solution is necessary to solve the problem in the long term.

“If they want to panhandle, they should have to do it 500 feet away from someone’s house,” she said.
Posted by Queens Crapper at 10:16 AM

Why does a citizen have to go to the community board to get police action? Don't the cops drive around on patrol and see themselves what's going on? Help me here. I don't get it.

Sorry, the moochers have more rights than you taxpayer. You know New York City values and all that.

“We are utilizing locations like this as a bridge while we phase out the use of all cluster sites and commercial hotels citywide, replacing them with a smaller number of high-quality borough-based facilities,” a spokesperson for the agency said in an emailed statement.

Let's be honest here, this city and other "right to shelter" cities and states have done NOTHING to eliminate homelessness except to just warehouse them. AND let's fact it, majority of these homeless like the two ghetto douchebags pictures are just chronic lazy ass individuals with either mental and most likely alcohol/drug issues that do not know the meaning of PERSONAL RESPONSIBILITY. They have chosen this lifestyle and career path since they were probably teenagers, otherwise lazy ass motherfuckers who don't want to work.

The other homeless in this city come from other cities, states and countries since they know NYC will plop them somewhere and give them free phones, like the douchebag homeless drug addict couple from New Hampshire whose young daughters died in that radiator explosion in that cluster homeless site in the Bronx. Others are single women with multiple children by different men and again NOT taking personal responsibility for their actions or behaviors.

Very few homeless are homeless due to unforeseen circumstances.

AND no one is one paycheck away from homeless and the liberal asshole leaders of NYC always like to say. No one wakes up one day and automatically becomes homeless.

OH and one more thing, if NYC is too damn expensive for you that you cannot find a place to live, there are several states in this country where the cost of living in not outrageous like NYC.

AND of course the city asshole leaders have not done ANYTHING to properly deal with any of this. I mean ride the E train, it is pretty much a homeless shelter with wheels starting at the Jamaica homeless encampment at Jamaica Center.

PERSONAL FUCKING RESPONSIBILITY and being held accountable for your own fuck-ups.

Your fuck-ups are NOT my responsibility nor should I as a tax payer have to pay for such services. I AM NOT MY BROTHER'S KEEPER. That is bible thumping and liberal bullshit.

Funny, that million of people have to put up with this shit from a small population of homeless who went down the wrong road because of poor choices.

AND let greedy corporations who have shipped jobs oversees, laid of tons of people and screwed people over left and right pay for the homeless situation, NOT hard working tax payers who barely keep their heads above water in this city. AND the 1% conservative and liberals (especially celebrities who are always shooting off their mouths about societal ills from their gated communities) chip in for this crap.

I bet I know where the cops are responding and being proactive, in the areas where the hyperdevelopment is going down. But the other obvious factor is the continuing gerrymandering of the homeless population and the utter dishonesty of the DHS in the usage of hotels by claiming they are for poor families, when it's clear they are mixing in the mentally ill and recidivist criminals.

precincts map hoods and assign dedicated pairings of officers to each section or quadrant, alphabetically labeled. you can usually find this info on their website, with direct cellular contacts listed.

make use of it - the response time is way, way faster than calling the general line or even 311. whether by dint of luck, or, more likely experience, and the awareness that they are under heavy scrutiny, my particular area has fewer issues, although we've got multiple shelters and working guys who distribute store flyers to make a dollar.

Vibrant ... but not necessarily diverse if all the panhandlers are the same race.

Those bumbs are Dumblasios constituency, Big Bird won't be happy until he turns NYC into ghettostan

Welcome to the future of New York City...

If they’re not committing a crime,there is nothing that can be done. All minor violations are not to be enforced,as per the Mare.

Donna Thompson needs to appreciate the diversity of the alternatively domiciled,

Ah, Jamaica, the new cultural center of New York as the politicians have decided, because their developer friends want the magic of Astoria and Williamsburg to spread east. (snark)

And of course, dutiful Queens Council of the Arts complies while the real borough arts scenes (as they exist) are being extinguished.

Where is your community board?
Where is Queens Civic Congress?
Where are the editorials in the Queens weeklies.
Where are the civics?


And where are the electeds?

Coming to your neighborhood real soon...

Catch some skunks from upstate and leave cat food an water about so they stay in the area. These assholes will think twice before taking a dump behind a shrub and disperse. Most are crazy or don't even belong in this country.
The mayor should get them bus tickets to Miami, they would be much happier there.

The cops were too busy using their sirens and lights to beat traffic this holiday season.

Gary W , everyone has the same right.
Isn’t pan handling in public freedom of speech Ike’s you are harassing

Future for outer queens maybe , but this was once all of manhatten ....now it’s too wealthy

The future of NYC will look worse than Portland & San Francisco !!

There's a homeless person living on 160th St under the LIRR trestle, virtually right outside the gate of York College. I'm sure that won't wind up in their next recruitment video.

Re " Brother's Keeper". When Cain slew Abel, he asked God if he was his brother's keeper. Interesting to note that God never answered that question directly. If God maintained that Cain was indeed Abel's keeper, the word "yes" should resoundingly start off verse 10, no? It doesn't.

"And Cain talked with Abel his brother: and it came to pass, when they were in the field, that Cain rose up against Abel his brother, and slew him.
9 And the Lord said unto Cain, Where is Abel thy brother? And he said, I know not: Am I my brother's keeper?
10 And he said, What hast thou done? the voice of thy brother's blood crieth unto me from the ground.
11 And now art thou cursed from the earth, which hath opened her mouth to receive thy brother's blood from thy hand;
12 When thou tillest the ground, it shall not henceforth yield unto thee her strength; a fugitive and a vagabond shalt thou be in the earth.
13 And Cain said unto the Lord, My punishment is greater than I can bear."

Welcome to deblasio’s New York. Every Queens neighborhood will have this and we have nothing to say about it.
Some on Queens Blvd don’t want you to buy them food. They want your money and not just a dollar.
Thank you to the ones who voted him back in.