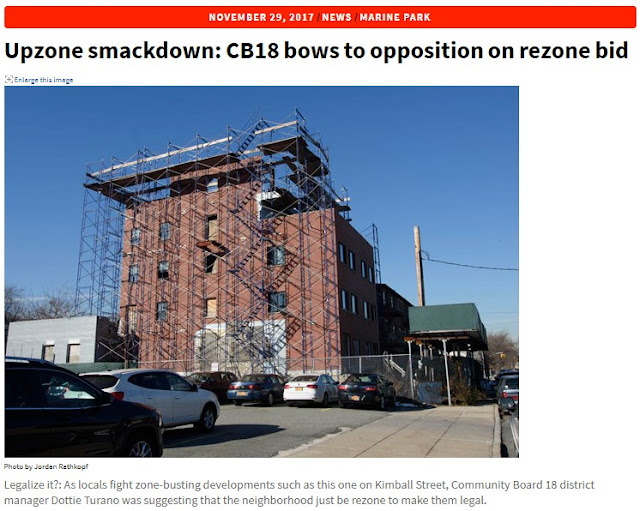 Interesting mini-scandal involving a Brooklyn Community Board, as reported by Brooklyn Daily:

Locals showed up in droves with nostrils flaring two weeks ago protesting the board’s request urging the city to look at changing the age-old zoning of Marine Park and Mill Island to allow developers to put up larger buildings. Marine Parkers were up in arms over the submission, charging the neighborhood can’t handle an influx of people or construction and is already combatting zone-busting developers on several blocks.

This paper first reported the explosive item in the CB18 budget request earlier this month in a story that Turano denounced with the Trumpian epithet of “fake news,” despite being unable to cite any factual errors. Turano insisted there was no reason for people to get so upset since there was no concrete upzoning plan yet— it was merely a request she had actually been floating for years, she said.

“It’s been in the budget for several years,” said Turano.

Indeed, CB18 slipped the item into the budget — “Study land use and zoning to better match current use or future neighborhood needs,” specifically the areas of Mill Island and Marine Park — for the first time in December 2015, and then every year since, according to city records.

But both Maisel and the civic group’s president Bob Tracey said they were never consulted about it. In fact, neither of them had any idea the rezoning request even existed, let alone that they were listed as supporters.
Posted by Queens Crapper at 12:04 AM

Sorry, deBlasio has a mandate. Throw is some "affordable housing" and get your up zoning.

Locals showed up in droves with nostrils flaring two weeks ago protesting the board’s request urging the city to look at changing the age-old zoning ...
-----------------------------------------
Why do people do this in the other boroughs but find excuses in Queens to explain why their faces are perpetually in mud with a smirking politician's foot on their neck?

I really dont understand the need to build more in this city. Its too packed as it is. You will never have affordable housing for everyone, because the more you build the more people will come.

I really dont understand the need to build more in this city. Its too packed as it is. You will never have affordable housing for everyone, because the more you build the more people will come.

EASY ANSWER: BECAUSE THE DEMOCRATIC MACHINE UNDERSTANDS CITIES ARE WHERE THEY RECRUIT AND WHERE THE GROW. LET MID AMERICA GO TO HELL, THEY SAY, BECAUSE THEY DO NOT GO ALONG WITH THIS BS. SO THEY LET IT DECAY AND STAGNATE.

IF YOU HAVE AMBITION YOU ONLY HAVE ONE PLACE TO GO: CITIES.

OF COURSE THE NY DEMS NEVER EXPECTED THE COUNTRY WOULD DO SOMETHING THAT NEW YORKERS DON'T HAVE THE BACKBONE TO DO: VOTE SOMEONE IN OFFICE THAT IS NOT ON THE SCRIPT.

"IF YOU HAVE AMBITION YOU ONLY HAVE ONE PLACE TO GO: CITIES."

As usual, types like you get it ass-backwards. Young, better educated people do move to cities. It is a longtime trend that has accelerated in recent decades.

If you actually meet and talk to these people you quickly find the reasons for leaving their little picket fence lives behind.

It is a combination of politics, ambition and the freedom for the constant scrutiny that many feel in small communities.

And leave that orange loon out of all this, whatever argument you try to make falls apart as soon as you bring that jackass into it.