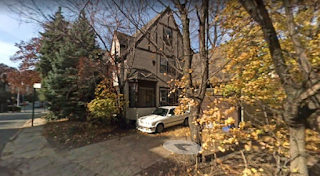 A developer plans to demolish a century-old Kew Gardens home and replace it with a multi-family building.

A demolition permit was filed on Dec. 14 with the Dept. of Buildings to bulldoze 116-17 Grosvenor Lane, a 3-story single family home that was built in 1899.

Steven Li, the owner of Grosvenor Realty Group LLC, said that that he still hasn’t determined what will be built to replace it. No building plans have been filed.
Posted by Queens Crapper at 4:26 AM

Can’t wait to move far away.

And the over-development cancer keeps on spreading. AND then they wonder why nothing works properly in this city from schools to subways and everything in between.

it's not unprecedented to assume a MFB would replace it, but if the existing area's zoning regulations govern the new construction, it shouldn't be horrendous. though, that's predicated on money not greasing the right hands at the DOB to ensure something worse takes its place...

You may not need a weatherman to tell you which way the wind is blowing, but we can appreciate Crappy warning us about oncoming Queens Crap !

Another on 117th Street... Yes, the destruction of old and beautiful homes and a community that had character. We are seeing it throughout Queens.

Homeless shelters, community prisons, no place to park and yet Ronald McDonald Koslowitz runs unopposed in the last election.

I live in this area and it is ridiculous. The streets are already too crowded and the street parking is pretty scarce. More and more people are parking in driveways, hydrants and no standing areas with impunity. We didn't want to live so far out in Queens but the one benefit was that at least it wasn't crowded like all the other areas. If it's going to be so crowded, we might as well move west so the commute to Manhattan will be shorter.

Tommy, bring back the Monkey!!! he's been rested enough.

This blog is about many things related to Queens. One of which is that unrestricted free enterprise in land usage is NOT a good thing.

I had to drive from Kew Gardens Hills to Midwood in Brooklyn yesterday. What was always a 45 minute commute turned into a 90+ minute nightmare. There were just too many cars for the Van Wyck and Belt Pky to handle.

You can only fit so many bodies/cars into a given space at a given time. You can't drive anywhere with any ease any more. You can't relax; you're in a constant tense state. It is physically and mentally exhausting. You have to drive hunched over your steering wheel, ready for someone to cut in suddenly. You have to sit in bumper to bumper traffic, often coming to a complete halt. And you have to do this with major deficiencies in the roads.

In many places, for long stretches of road, the lane markings are completely worn off, creating a very dangerous driving condition at night. It is like "Guess a Lane" for miles, just begging for an accident. The street lights illuminating long stretches of the Belt are also out, so I had to switch on my brights to see the road at all. Ditto this same situation on the Van Wyck and every other major highway around NYC. It's just become such a major unpleasant undertaking to just drive from Point A to Point B.

The infrastructure has not kept up with the huge influx of population into the area, vastly degrading the quality of life for those who live there. All to line the pockets of DeBlASSio and his developer masters. For the greed of a few, all must SUFFER. So yeah, we all need multiple floors of residents shoved into a small space instead of the amount living in a single family house. Like we need a good case of shingles.

This plus the guy that always posts 'its time to move' makes you think that Queens is uniquely filled with losers that wilt at a lowly councilman's glare (or with the 'its time to move guy' why he even bothers to post), but then, you say, hey, wait a minute, the hacks are back at work doing everything they can do discourage you from civic engagement.

Put the address into google and look at the surrounding street view. That house is already odd-man-out.

The owner probably held out till he got a price that he knew would only work for a developer.

You can try to prevent this sort of thing via zoning -but understand that it will pit you against those others in your neighborhood who expect to get $900G -$1mil for a house they probably paid $35G for 40 years ago.

They should meet them. It takes real ignorance and greed to tear down 300 year old buildings for another shit box that make a few well connected locals rich while dumping on an infrastructure that is about to collapse.

When you go to communities like East New York, or Crown Heights, which is moving ahead of places like Astoria in valuing their communities with stuff like Landmarking, you know they have a better future in the long run then areas that equate 'community' with 'dirt'.

^correct. African diaspora communities toughed out bad times and managed to remain- as homeowners of handsome brownstones and lovely homes in areas like Cypress hills. some may sell but they generally keep the place within the family. ditto Indo-Carribs in Hollis and far SE queens, which is laudable despite the legitimate issues raised by the likes of now -defunct cleanupJamaica blog.
the same holds true for most Asian populations, many who make quiet and inoffensive neighbors of mine. all of whom are distinct from greedy lls/devs (a category which crosses all racial bounds, sadly).

rob is accurate that a quick street view check shows how out of place that particular home in Kew now was. neighborhoods evolve and grow - but it is not a process that happens in under two decades. lefrak city etc and other large complexes coexisted alongside small homes without threatening to overshadow or assimilate them in Queens going back to the 1960s. imho these changes should be planned carefully, with community input, and aggregated/ centralized as much as possible.

they very act of"spreading out" high density construction amidst formerly low rise streets advances the disruption and division of those hoods. if it must happen, keep like with like and stick it in main thoroughfares only (like facing queens boulevard).

if we draw any worthwhile conclusions from this example, it's that it was a remnant predestined to be replaced existing on borrowed time. the time to scrutinize these moves isn't when the last house goes - but the first.

What does Queens Civic Congress have to say?

Or should we focus on yet another bridge pricing or airport noise issue study.

Not sure why anon cherry picked my comments? But guess what, I have talked to my neighbors. I told them two years ago the hotel on QB would be homeless shelter they laughed. They laughed when I told them their was a plot to close Rikers and develop it.

About three months ago I got a flier in my mail box urging me to call KK's office to ask if she could put pressure on Parks to get more trees planted!!

That is what that neighborhood cares about, fucking trees!

So their ignorants asses deserve what they get. Tweeded hard and good. I'm done with them.