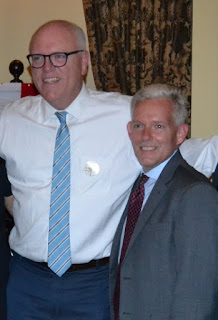 Some day, some one will trace the history of modern day LIC back to the Modell Family Trust, the machinations at Community Board 2, the oversized influence of an unelected, friend of developers, local official who maintained control even after leaving office, and the “I fight for the little guy, champion of gay rights” image Mr. Van Bramer uses to divert attention from his proactive/passive cooperation with the real estate industry. The only development project Councilmember Van Bramer publicly opposed was when Phipps Houses wanted to enlarge its housing development (with a significant affordable housing component) a few blocks from where Jimmy lives in Sunnyside Gardens and his neighbors and friends, especially those who are members of the private public Sunnyside Gardens Park, howled that it was too big. Western Queens developers and Van Bramer are expert at keeping things in the shadows.

"The only development project Councilmember Van Bramer publicly opposed was when Phipps Houses wanted to enlarge its housing development (with a significant affordable housing component) a few blocks from where Jimmy lives in Sunnyside Gardens and his neighbors and friends, especially those who are members of the private public Sunnyside Gardens Park, howled that it was too big"

That's the funniest and damning part of his whole charade. Just like his sudden concern of the show palace for its in proximity with that lame ass arts group's building that he has ties with.

Sure he turns the other way when the needs of the working poor and dwindling middle class need new affordable places to live, that when he suddenly shows concern for overcrowding in his district. But he's there as a minstrel for REBNY, shucking and jiving by boasting about the vibrancy the tower pestilence has brought there.

Jimbrowski is one of the worst of the defiant hypocrites in elected office. And he acts like he doesn't have a clue that he's offending everyone. Even with all the confirmed donor money making it obvious, this scumbag is going to speaker. He is the perfect tool for this corrupt neoliberal fauxgressive administration and for the current state of the DNC.

JVB is a cancer to the neighborhood. His constituency means nothing to him. He is a puppet for the REBNY. oppose him and you're branded a homophobe. If having common sense, a care for the community and an opposition to the gentrification, over-development, raping and pillaging of the community means being branded as one, then heat up the iron because JVB is a sad excuse for a public servant.

rebny minstrel, or jester? I guess the former, since jesters supposedly spoke truth to power.

decking over the Sunnyside yards would destroy of of the last "natural" barriers halting over development eastward, and the devs know it! partly why I chose to live with a railroad at my back and highway alongside... although even those don't fully insulate the community.

queens cb' s need more guys like that Bayside fellow (Graziano) who was able to create new R2 zoning to preserve homes through the northeast of the borough.

Look. face it. LIC is fucked beyond repair.

Now where do we draw the red line from further encroachment? Who will leave the charge and the troops?

BTW Have you seen all the high rise development along Queens Boulevard between the RR overpass and 69th Street?

Fortunately, Jimmy doesn't mind when anyone insults him - he just turns the other cheek.

How ironic that the last Anonymous is more annoyed with Voicer Tommy Efreeti's harmless 'monkey' icon——but, he/she retreats into deafening silence over the topic of discussion, where the entirely corrupt, dishonest, dishonorable, disloyal and unconscionably derelict scourge of Queens County politicians (not public servants), are an embarrassment to ACTUAL primates themselves (and always HAVE been)!

But, it's the icon of a monkey that you find annoying. What I find annoying is you and your insipid comment, which is the reason why Queens County is a raw sewage plant of 300% false, fake and failed leadership, while simple life forms like you grouse over a harmless icon, versus the obliterating damage inflicted by a scourge of monetary locusts that is worse than nuclear proliferation (and a hundred trillion times more LETHAL)!

Go back to your Twitter banality, obscurity, and daily bowl of gruel as self-punishment, Anonymous. The rest of us with functioning eyes and ears are 'WHITE HOT' with anger that is volcanic, as We, the People have been hijacked, and held hostage by a vortex of political rage and despair that never ends (just like the captors afflicted by the Stockholm Syndrome).

Now, there was a time that I used to think that ALL politicians (not public servants), were just a slither above the skankiest, filthiest, below the gutter whores who knew how to take cock 'whole and straight' (without a gag reflex).

Turns out that the mentally ill, defective and completely mad and drunk with depravity politicians, like Councilboys Eric Ulrich (a/k/a Derelict Dullrich), Jimmy Van Brainless (and the entire scourge of filth at Joe Crowley's annual Christmas desecration/bacchanalia), could teach the lowest crack whores how to successfully alternate between MANY of the party-machine-failed 'Big Swinging Dicks,' as well as the biggest corporate and REBNY cocks, without missing a beat to come up for oxygen——and, they can all do it at will!

Frankly, I'll take an honest crack whore ANY day over this openly practicing, derelict, dishonest, dishonorable and disloyal scourge of epic government fail——because, they're ALL more dignified, as they continue to make an honest living by comparison, where it's always quid pro quo for services rendered (unlike the kleptocratic kakistocracy of more of the same 'taxation WITHOUT representation' that devalues honesty itself).

It's beyond sick then, to watch these shameless cocksuckers OPENLY disgracing flag, country and Constitution, as they proudly wear the American flag in their oily lapels, whilst doing everything to betray it, with a vengeful impunity that is unprecedented to date. These vats of filth are the greatest enemies of the state, and they are committing some of the greatest crimes against humanity that now DEVALUE honesty itself——to pathologically high treasonous, traitorous and tyrannical effect!

Merry Christmas, Queens County——compliments of that big, red, white and blue dick that these voracious thieves have never stopped cramming up Queens County's sore-and-stretched out asshole!

Men (REAL men, that is!) have been hanged for LESS!

That's his way of "spanking the monkey" in public!
Oooh! Aaaah!

Back door Jimmy is not to be trusted.
That little dork needs to be arrested.

Now, there was a time that I used to think that ALL politicians (not public servants), were just a slither above the skankiest, filthiest, below the gutter whores who knew how to take cock 'whole and straight' (without a gag reflex)..........


BLAME THE QUEENS VOTER. I CANNOT SEE ANY OTHER BOROUGH PUTTING UP THIS - OR ANY COUNTY IN THE NATION FOR THAT MATTER. THEY ARE BEYOND PATHETIC.