Waterfront library's opening pushed back to 2019 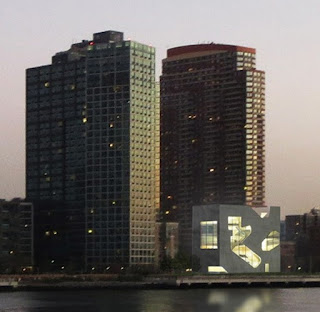 Construction on the the Hunters Point Library is delayed once more, and is expected to be completed in August 2018 with a possible opening in 2019.

The update on the $40 million project was announced on Dec. 18, when the Department of Design and Construction and the Queens Public Library testified on the progress of several library projects during the City Council Subcommittee on Libraries meeting, chaired by Councilmember Jimmy Van Bramer (D-Long Island City).

“It is a unique design,” Walcott said at the meeting. “When we talk about outfitting a normal library it can be three to four months. With Hunters Point we are saying six months.”

Van Bramer questioned the DDC and the QPL on the series of “horrific” mistakes that have led to the project’s multiple delays, including the fiasco involving the glass used for the library’s windows.

The architect, Steven Holl, insisted that a specific type of glass be used for the building due to its lighting and heat features. The glass chosen was manufactured in Germany, glazed in Spain, and eventually exported to Connecticut before reaching Long Island City. The glass was held up in Spain, however, due to a strike by dock workers at a port.

Only "under two years" of additional delays? It's a Festivus miracle!
Posted by Queens Crapper at 12:05 AM

Until the facility is complete, one can access most any literary work from ones' phone...

Putting an awkward block of Swiss Cheese with windows letting hours of the setting sun which will bake collections and furnishings, right on a waterfront which will start to routinely flood in a few decades, accessible to only the half of its footprint that faces land, is a true brainchild of the Queens Library Board, which itself, a true representation of cultural, civic and political leadership of Queens.

BTW, speaking of flooding and cultural institutions, keep hearing that a certain museum near the East River had compromised collections from a hurricane in the not to distant past.

This abomination has been a boondoggle from the get go. Everything about this project is irrational and illogical. Why the necessity to have materials imported from 3 different nations to build a goddamn library, this could have been built in about 10 months with the standard materials and competent design. But no, the library board were more concerned about aesthetics to the glass tower pestilence surrounding it.

Of course it should not have been built there at all considering the obvious and well documented risk of potential flooding from the cause of the future effects of extreme climate change and sea level rise. But it's obvious that this library isn't really for the general public to use and enjoy, but a palatial hangout for the elected and appointed elites and their moneyed donors to have circle jerk conventions in.

Where did the architects get the idea for that design anyway? From Superperfection?

it'll be a nice library, I'm sure. a visible sign of political goodwill local reps can trot out to burnish their reputation later with.

my two kopeks, lic is not a family area, no students or adults will really use the place except as a meeting or bragging point.

my hood got a nice new library recently..i disagreed with the aesthetic but it is inarguably elegant, and more importantly, a boon to local residents whose kids study - lots.

Must have been designed by the same idiots who designed the new Kew Gardens Hills library. First, the "one year" renovation lasted more like three years, thanks to the corrupt head of the library system stealing millions. Second, the library is carpeted with cheap looking light green carpeting that's already wrinkled and stained by feet and stroller wheels, making it look grubby. There is absolutely zero dignity or atmosphere in the interior of this library. It most closely resembles a Home Depot stockroom, with steel grey industrial shelving instead of nice wooden shelves. The walls are painted cinder block and the furniture is cheap looking industrial plastic. There is nothing to talk about when it comes to decorations, exhibited items, or displays. The entire library looks very, "It's very late in reopening, let's just throw it together with cheap crap and stamp 'Finished" to this project!" The book selection is also lousy and poorly labeled. The librarians all sit in a central circular desk where the checkout machines are, so they can sit there and gossip all day instead of looking and acting professional. It's about as appealing as going to visit a utility room. Absolutely no draw for me. I've spoke with other patrons as they left this monstrosity and they shared similar sentiments. We've been robbed.

Another Jimmy Van Bramer success story. During his tenure as head of the City Council committee responsible for libraries, we've experienced the plundering of QPL taxpayer monies by two former executives, with not a dime recovered and several wasteful library construction projects. When will Jimmy be held responsible for his malfeasance in his oversight responsibilities?

When will Jimmy be held responsible for his malfeasance in his oversight responsibilities?


Wish it was just Jimmy. That entire board, which was a sample of the Queens elite (if you can call it as such) was removed in plain sight of 2 million Queens residents and no one demanded justice for our wasted taxes, or insisted that the hack run patronage library system be merged with the professional NYPL.

So sheeple, while you sit around finding excuses not to do anything the rest of the world moves on.