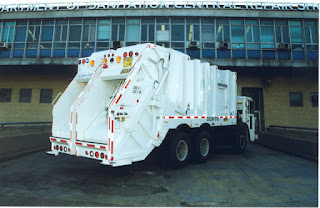 The city must rework how it collects large junk from Bay Ridge and Dyker Heights streets because the Department of Sanitation’s new garbage trucks have less space to cram in hulking waste, according to locals.

Mattresses, furniture, and other large items are piling up curbside because the area’s new trucks are split between trash and organics. Now an extra truck swings by occasionally to collect the leftovers, but workers miss items that are then left to fester for weeks. The new procedure is just one big mess, said a community leader.

The Department of Sanitation rolled out the so called “dual bin trucks” in October 2016, which are divided into two compartments — one for trash and the other for biodegradables — as part of the city’s organics collection program, where residents haul bins packed with food scraps and yard waste to the curb for pick up, according to a Sanitation spokeswoman.

But the trucks’ split trash compactor means the garbage side fills up faster and makes it more difficult to crunch what the city calls “bulk” items — anything bigger than four feet by three feet — and things get left behind, according to Beckmann. The result is a hodgepodge of junk littering the streets until a truck with the specific purpose of picking up bulk comes by. And that only happens if workers remember to fill out a form logging the rubbish and pass it along to a supervisor, according to an agency spokeswoman.

From October 2016 to March 2017, 311 logged nearly 300 complaints for missed bulk collection — compared to zero for the same period the year before, according to city data. But tossing a bookcase or a boudoir isn’t an everyday occurrence, so the city doesn’t think locals should be making such a stink, said an agency spokeswoman.

I'm sure this is also happening in Queens but no stories on it yet.
Posted by Queens Crapper at 12:10 AM

And how much fuel and labor is spent for four pick ups.

No one has the nerve to say that the vast resources wasted on this fools errand greatly outweighs any benefit...

These new trucks also drop crushed glass along their route.

Time to end this recycling nonsense. Think how much apartment dwellers could save if they didn't have to pay someone to sort trash all day.

Gary W.
Union Label? What does that have to do with anything??? Did the union by the trucks?Did the union decide on to recycle waste scraps?
Sorry, your bias shows through and your comment makes little sense.

The new trucks sure do drop crushed glass every 30 feet on my block. They are a disaster. And most of the drivers are not going to remember to log anything when they are coming to pickup the trash at 12:01am in my neighborhood in Queens.

I used to live in Kew Gardens and now live on Long Island in the Town of Oyster Bay where the politicians are slightly less stupid and corrupt than in NYC.

We have trucks that pick up garbage on one day (including most large bulky items) and a completely different type of truck that picks up recyclable paper, glass, plastic, and metal on another day. The town sends a flatbed truck for really bulky items like refrigerators and sofas that won't fit in the regular truck.
It works.
This is not difficult. NYC can't even get the most basic municipal services right.

"The new trucks sure do drop crushed glass every 30 feet on my block."
Yes you notice it if they crush the glass. It slips through the gasket between the two compartments. Sanitation "ass"Brass knows about the design problem but chose to drop glass through out our streets causing damage to our property and our health.

How about when these dual loaders are full and have to leave the remainder of the trash there? It was seen. The organics caused this. One truck for it, trash and recycling. Now for bulk you must call to schedule an appointment. How about making a day just for that?
Overcrowding=excess in trash.

If you shred and scrub trash, you can separate it the way private collectors do. WHy do we need to become servants to their green ideology?

Supervisors are supposed to ride every route so they should be logging any bulk or missed items. It's their job.

This has nothing to do with the union. Compost pick up is a "green" initiative instituted by the new Sanitation Commissioner. Sanitation workers would agree that these trucks are garbage (no pun intended) but we don't have any say when it comes to the purchasing new equipment. You would think that our input would be vital since we're the ones humping it out there everyday. Trucks purchased are done through a bidding process as most City vehicles and equipment are. Whether there is corruption in that process or not is above our pay grade.

Blame the new sanitation commish.the organic program is a big failure. She just does not want to admit it.

"WHy do we need to become servants to their green ideology?" That's the idea: Break the will of your subjects by forcing them to comply to inconsistent demands.

Don't we already have a separate bulk pickup day with separate garbage runs?