Foreclosed Jamaica homes continue to be a blight 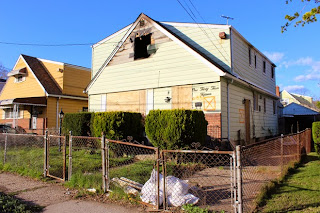 Dozens of homes are sitting empty in Jamaica, blighting the neighborhood with squatters, gang activity and drug dealers, residents and local officials say.

The abandoned properties, some of which became vacant following the foreclosure crisis, are usually easy to spot with overgrown grass and garbage piling up in front of them.

One, on 166th Street, was used as a hiding place for a gunman following the shooting of Jerwaine Gorman, a father of three, last month, officials said. As of Wednesday, nobody had been charged in that case, police said.

Neighbors said the home's previous residents moved out about two years ago. Some time later, they said, a group of men moved in.

“There was always a lot of cars parked outside, a lot of people going back and forth," said one neighbor, who did not want his name to be used. "They were so loud, always yelling and fighting.”

The New York City Housing Authority, which owns the house, said it "has been cooperating with police and has re-secured this property."

"We recognize the significant impact a vacant home can have on the fabric of a community, including neighborhood safety," a spokeswoman for the agency said.

According to local elected officials and published reports, of all foreclosures in New York City over the last two years, almost a third have been in Jamaica.
Posted by Queens Crapper at 12:00 AM

and why does NYCHA own a single family home?

Wonder how many racoons live in there?

...But Jamaica was recently named the most "up and coming" neighborhood in NYC.

Following the path of SHITTY Jamaica, despite all the bullshit about “the Revitalization of Jamaica” and “Jamaica Revealed” by such leaders as Queens Borough President, Melinda “the idiot” Katz.

It is hard pressed to find even two consecutive blocks in Jamaica that are decent. You are better off finding a unicorn.

Geez....look like the same kind of Cape Cod tricky tacky boxes found in some blocks of Whitestone .....except that Whiestone is...eh...a lot more "White".

Oops, now what did I just say? For shame!

Where are the "flip this house" guys from TV that seem to turn shit into gold all across the country? Never see them in NY? They kept out?

They're doing this so the property values drop to record lows. Middle class is moving out because of this and section 8 mess. Strategy for gentrification.

Vacant Homes and Developments -- Are not exclusive to Jamaica. It is happening in other neighbors and Bayside as well. Case in point: The Huang Development on 223rd Street in Bayside.

The development has for years seriously impacted the quality of life and safety of the neighbors in the immediate area and surrounding blocks. And, it justs gets progressively worse as time goes on.

"We recognize the significant impact a vacant home can have on the fabric of a community, including neighborhood safety," a spokeswoman for the agency said."

Comment: But, unfortunately, we are helpless to do anything about it.

Therefore, folks resides yourselves to continue to live with it. Endure it -- suck it up! Fear for your safety; turn a blind eye to the comings and goings of trespassers and vandals; while watching your home values plummet.

After all, you have to understand that our government, city agencies and politicians are pathetically helpless and powerless to do anything about situations like this. Our City Agencies have no real power or authority to quickly remedy unsafe situations caused by vacant homes and unsafe "dormant" construction sites with no "active" permits.

Why have our politicians not gotten the much needed legislation passed to enable the teardown of these offending structures. It is long overdue, as this has been going on for years.