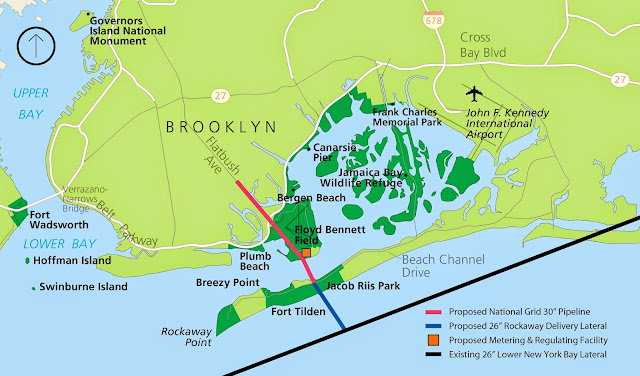 For the past week or so, natural gas has been flowing underneath Rockaway’s beaches through a massive 26-inch diameter pipeline.

The activation of a new 3.2-mile pipeline on May 15 allows for liquefied natural gas to flow through the Rockaway Peninsula and into Brooklyn to satisfy the growing demand of 1.8 million customers in Queens and Brooklyn.

The fracked-gas transmission pipeline called the Rockaway Delivery Lateral has been controversial among anti-fracking activists and environmental groups since the inception phase in 2009.

The additional pipeline, which began construction on June 9, 2014, extends from the existing Lower New York Bay Lateral, which is in the Atlantic Ocean, running parallel to the coast of the Peninsula.

The Rockaway Delivery Lateral runs across Fort Tilden and Jacob Riis Park – wetlands and recreational areas – to a facility used to meter and regulate the flow of natural gas, located on Floyd Bennett Field in an abandoned airplane hanger, within the Gateway National Recreation Area.

“That’s the point where we kind of hand off the gas,” said Williams Spokesman Chris Stockton. “It measures how much gas flows through the line and it also regulates the pressure.”

In total, 647,000 dekatherms per day can be be transmitted through the new Rockaway Pipeline to the National Grid distribution system. From there, the National Grid Pipeline takes the natural gas up Flatbush Avenue and into other communities.
Posted by Queens Crapper at 12:37 AM

The way this was planned was sinister, and not a damn surprise at all. This is similar to the last hurricane that briefly destroyed a city, Katrina in New Orleans, and a few years later the decision was made to drill for oil in the depths of the Gulf of Mexico and we all know how that turned out. So this project was decided by congress despite the record of Williams and while the populace was devastated and busy recuperating. I don't think the fires were even out in Breezy Point when they gave the go ahead to lay down the pipes. But in this era of Citizen's United, where money takes precedence over words, especially critical words, the energy market must thrive even if its at the expense of people and their rights to be secure in their home and no matter how much of a threat it is to their livelihood

But don't worry because the sellouts in the parks dept. has got a treat for us in that area of the rock to make us forget the looming danger under the sea. They gave a multiyear deal to a dubiously talented enlightened collective that organized events in, hold your breath...now vomit, Williamsburgh and Greenpoint to Riis Park, featuring art, commerce and music (featuring CUNT MAFIA). Thus beginning, with the help of the tax paying funded Parks Dept., the gentrification of a beach. It's going to be sweet for the hipshits who go to Fort Tilden, but what's interesting is the reaction of the people who usually frequent the area a few hundred yards east of it, mostly blacks and spanish, culture clash anyone? Of course with the pipeline in place and working it seems fitting that the hipshits would not mind since they are willing to pay thousands of dollars to rent a apt. in places near superfund sites like gowanus and newton creek.

So the only infrastructure that got done efficiently was a potentially disastrous methane tunnel and not the boardwalk. And the portions that were completed, despite the good job done by the workers, looks pretty bland and sanitized.

It's too late to do anything now except bitch about it. If this helps the town and the community more power to them. But this is a temporary fix.

But probably what's going to get hurt the most is the sea life in that part of the atlantic. The water actually improved there and led to some cool whale sightings. If this link is any suggestion and if they don't do proper regulations down there, a lot of marine life will suddenly dissipate. Although if something stupid happens, as it with deepwater horizon by the gulf states, life by the coast will too.

Good luck everyone, all apologies for being a grumpy curmudgeon

Connect it to Queens borough hall for an endless supply of gas!

That's quite a rant, obviously you have lots of issues with life in Rockaway but the issue with the pipeline doesn't make sense. There are gas pipelines under every street in the city that go right to our homes. There are also pipelines that go major airports and there are tankers coming into the harbor every day carrying millions of gallons of oil and other chemicals. It does take a lot of energy to run this city.
Hopefully in the future as things become more energy efficient and other forms of energy production comes to be the threat of a major environmental catastrophe can be avoided.

"It does take a lot of energy to run this city"

I am aware of that, in fact in south queens they just replaced a lot old pipes underground with pipes that look plastic, which I find equally alarming.

My issues are with the tactics and machinations in getting it approved. And I don't think that gas is going to be used entirely for the city. It might be used to be exported to foreign countries.

You're spot on about the alternative means, in fact I think, if might be analogous, that if mankind can make a phone that can have infinite amounts of information and convenience at our disposal, then it can harness the wind and sun to power our homes,cars and businesses.

if you were present for Hurricane Sandy and witnessed the destruction yourself, you would be very afraid of what will happen with the gas pipelines. this is rather frightening and totally stupid.

I'm sure some idiot will try and tap into it,just like they did years ago with the buckeye pipeline. Do they have any kind of security vpeople to patrol the areas where it is buried?

"There are gas pipelines under every street in the city that go right to our homes. There are also pipelines that go major airports and there are tankers coming into the harbor every day carrying millions of gallons of oil and other chemicals"

At least you can inspect and repair pipelines underground. that pipe is at the bottom of the ocean and will be more difficult to maintain. I hope they have a off shore station out there on the water so they can do routine checks.

Better hope we don't have another Sandy. And also hope that the area including marine park doesn't start smelling some peculiar odors or find their water could be used to light their grills.