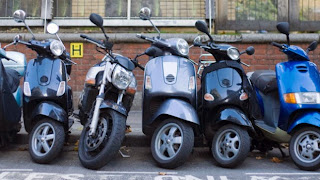 Under the bills, drivers would have to register them with the DMV and traffic infractions would be punishable by fines of $25 to $100.

The scooters, according to the lawmakers, have become part of the fabric of small businessesmaking deliveries throughout New York City. They said attempts to ban them haven’t worked, and accidents can create big liability issues.

Simotas said she’s heard from too many people about near misses and being hit by riders.

Peralta told 1010 WINS the City Council banned delivery scooters in 2004, but since then the number of scooters has actually increased.
Posted by Queens Crapper at 12:30 AM

What's the sense of having a law if it's not going to be enforced ?

App food delivery services seem to be the only manufacturing jobs that have abundantly thrived in the last few years, mostly in NYC and and the tony areas of Brooklyn and Queens. Which may be the reason why these skells delivering the food think they can get away with impunity. I rarely see cops flag down these creeps, for they constantly drive their scooters and those ugly motor bicycles (I dub them pussybikes) run lights, go the wrong way and ride on the sidewalk. They also used the pedestrian and bike paths on the Manhattan,Williamsburgh, and Queensboro bridges. A lot of them don't speak English (probably refuse to learn), so they can use that as a crutch to excuse their reckless behavior. Shouldn't vision zero apply to these drivers too?

Seeing legislation to curb these derelicts is fine, but it would have more heft if some elected officials in Manhattan came up with this, for that's where the bulk of these "small businesses" are.

I get plenty of surprises from these bozos when I ride in the city, they cut me off and whiz by without warning, but it's just fine because they don't/won't speak english and some lazy yuppie or hipshit needs his lunch. One lowlife actually cursed at me and then hit my back wheel with his pussybike because I was moving too slow for him.

I don't foresee these laws being enforced once enacted. The laws already there involving traffic violations aren't even be enforced. There has been a policing slowdown for years when it comes to certain areas. The food delivery business, especially now since it has integrated with social networking, will continue it's habits and hiring of obviously illegal immigrants, unabated by this legislation and even current laws

Great idea - how about mandating insurance as well? Most of the assholes driving them don't follow any of the traffic laws, but then again most of the people driving cars don't either - especially in shit-hole, broke-down Flooshing!!!

The only people that will register them will be old white guys!

"What's the sense of having a law if it's not going to be enforced ?"
It gives the "Sheeple" the illusion that their elected's are actually DOING something.

"how about mandating insurance as well?"
Don't stop at scooters require insurance for bicycle riders as well. Let them pay for their bike lanes...

Bike insurance means paying insurance companies - has nothing to do with paying for bike lanes.

"Don't stop at scooters require insurance for bicycle riders as well. Let them pay for their bike lanes..."
Right and tax my feet and the air I'm breathing.

How about regulating bicycles...license plates and insurance required? Those cycle lanes are a hazard!

Bicycle insurance means bicycle registration = Income for the city to pay for the Bicycle lanes. Everything motorists are required to do should be required of bicycle riders as well.

I suspect that there will be reluctance to enforce these laws because the evaders will continue to take life and limb reckless risks to avoid the summons.

Unless you confiscate and haul away, no amount of paper (or laws) will mean anything.

"Right and tax my feet and the air I'm breathing."

Attempts to ban them have not worked.
Why not? Just confiscate them and fine the owner.

The current electric bicycles actually falls in with NY State Class C (0-20 mph) Mopeds. The only catch is that NY State has a crazy statute that actually forbids having foot pedals that the rider can crank to power the moped.

Removing that asinine rule (so that it would fall in line with motorized bicycles/moped laws in the other 49 states) would actually solve this neatly. It would also force current riders to get driver licenses and plates.

E, Vespa Velo are Italian magnificence, watch a your self