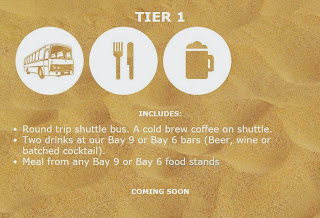 I don't know if you go to the beach, but I do. It's the Riis Park section of the article. For some reason the parks dept. gave a multiyear deal to some collective called the Brooklyn Night Bazaar to organize an all summer long market and concert series in a location that does not have the room for it. The worst of it is that they are going to provide patrons with apps so they can have food from their "bazaar" brought to them via an app, which will probably include booze.

I commented before on your site about the city's plan to gentrify rockaway and here it is. Despite the millenials interest in Fort Tilden, on the east side dubbed "the people's beach" the majority of beachgoers are black and hispanic. This has the makings of a culture clash, and will probably lead aggressive supposed quality of life enforcement against the folks who will not have an interest in what the Brooklyn Night Bazaar has to offer, who prefer to bring their own food, drinks (Booze and Soft) and beach chairs.

Sorry to bother you about this, but you're good at this sort of thing. I also plan to write to Walk in the park about this too and do my own research since their website is unreadable. Something stinks about this group, similar to those slimy scumbags that run the knockdown center.

have a good weekend.- JQ

Brooklyn Night Bazaar gentrified themselves out of Greenpoint, so their next frontier to help destroy is Rockaway.
Posted by Queens Crapper at 12:18 AM

We can't have people enjoying things you don't like can we?

Does all change equal destruction?

I'm not sure when it became so that people couldn't enjoy a day out without alcohol, but that seems to be the case for every event that has been scheduled in the last 5 years or so.

Yet the people attending and organizing this event will be the first people that cry about gentrification. I guess they don't see their part in it.

I wonder how much Moma/PS1 is involved with this. Does anyone remember the bullshit "Art Dome they insinuated on the Rockaway Community after Sandy?

"Yet the people attending and organizing this event will be the first people that cry about gentrification. I guess they don't see their part in it."

It already happened, they got priced out of the lame grotesque overrated overvalued part of Brooklyn.

Which is astounding that the Parks dept. would give them a multiyear deal to hold their douchefest. They couldn't make any money before so our tax dollars are going to finance their bazaar of mediocre creativity, bland music,expensive bland food and beer. More welfare to please Generation Gentrification.

And I remember that artdome, that thing was pointless. It's too bad all the celebrities that came down there after the storm didn't contribute some of their money to start a nonprofit charity to refurbish the boardwalk or people's homes.

I think the Blaz's kids and some people at Berlinrosen might know the promoters of this festival.

Did anyone catch our enlightened mayor christening the finished segment of the boardwalk with his giant ass and ordering his minions to keep protesters 100 feet away from him? They claimed the signs might be disruptive and block views for other people.

The Blaz has contempt for the people of rockaway, east and west, of all races and creeds. Remember his recent quote that the people outside of NY approve of his job. This guy wants the beach to be some hipshit/tourist mecca.