Vision Zero is a net zero 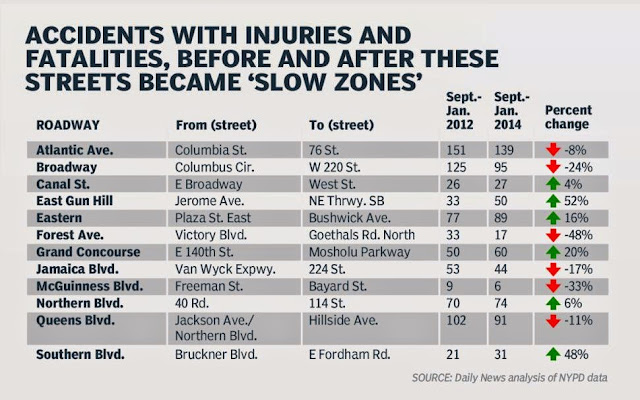 The News’ analysis focused on 12 major thoroughfares where many of Vision Zero’s high-profile policies — increased enforcement, improved signage and, in most cases, a reduced 25-mph speed limit — were first implemented.

The News compared the stats for the roads in the months following the rollout, from September through December 2014, with the same period in 2012, which was a statistically average year for traffic-related fatalities. The News found:

Some roads saw huge drops in the number of wrecks that resulted in an injury or fatality — such as a stretch of Broadway in Manhattan, from 125 to 95, and Forest Ave. on Staten Island, from 33 to 17.

But on half of the roads, the carnage actually increased. Fifty people were injured or killed on E. Gun Hill Road in the Bronx during the months following the speed limit reduction, compared with 33 during the same time period two years prior. On Southern Blvd. in the Bronx, casualties jumped from 21 to 31.

Overall, the number of wrecks remained virtually unchanged on those problem corridors, and casualties fell only 4%.

Citywide, The News found there wasn’t a marked decrease in the number of wrecks during 2014, compared with the prior year and a half. And March of this year was among the months with the most wrecks between July 2012 and March 2015 with 17,410 — including nearly 2,600 that resulted in an injury or death.
Posted by Queens Crapper at 12:42 AM

Too bad the Daily News can't actually write the correct name of streets.

Without the least bit of enforcement, there will always be traffic infractions wherever one goes. Vision Zero is just a ploy to make NYC residents think that the administration cares and is doing something. It gives false hope.

I am sure you will hear it over and over again on this issue, but ENFORCEMENT or lack of it is the real culprit. Why bother have laws if they are not to be enforced. The other day a City Council Committee voted on Intro 315-A, introduced by Council Member Vallone, that would require the Department of Transportation to study the compliance of trucks in adhering to the city’s designated truck network and through routes.

Again why do we need a bill to be passed when there is already a law on the book that bans trucks (except local delivery) on residential streets. No one takes any responsibility, passes the buck and then makes a million excuses of why it is not getting done.

Joe, the reason is that passing laws provide headlines. These pols are cynical bullshit artists and publicity hogs. They prey on the gullibility of people lulled to sleep by a few generations of good government. That ended with the Manes Machine that is still in place.

"Vision Zero" was all about creating an illusion that something would happen. Happy to see that reality has asserted itself. Sad to learn of the traffic deaths.

Tickets are up
Injuries are up in DA Bronx ?
Wilhelm from da Block ain't going to be chillin wit dem stat's

Is "Jamaica Boulevard" supposed to be "Jamaica Avenue"? Am I missing something, or should the NY Daily News know this?

Its no accident that Jamaica Avenue is now "Jamaica Boulevard"...Bushwick is now "East Williamsburg", East Harlem is "SpaHa" and Downtown is "TriBeca".
Isnt Jamaica supposedly the next major center of gentrification in Queens? It certainly is poor and filthy enough just like all the other neighborhoods that have been gentrified.

This shouldn't surprise anyone. The lower speed limit limit lulled pedestrians into a false sense of security. They think they can cross anywhere without looking and cars should be able to stop in time. Then there are the drivers who drive even more recklessly to avoid the slower flow of traffic. They could have left it at 30 and just enforced what we had.

Enforcement is what lacks, I hardly see reckless drivers get pulled over anymore. What I am seeing is just irresponsible behavior from all forms of life. Bike riders practically cutting people off (mostly citibike riders and of course app food delivery creeps), arrogant pedestrians, kids carelessly running in the streets, and of course classic reckless driving. A lot of drivers running stop signs and red lights, speeding while turning and the new thing is to swerve around a car in front making a turn or parking. Also double and triple parking.

City workers and police are the common offenders, I have seen plenty blow through traffic without sirens and of course playing with their smartphones, it shouldn't be any wonder why habits die hard, actually continue to thrive.

It's almost like there is a sense of anarchy right now, just a big dearth of common courtesy among the masses. Lowering the speed limit was a temporary fix. Mayor Big Slow continues to arrogantly and pompously brag about the positive results in some areas but obviously avoids the massive climbs in some as shown in that graph.

These are the New Bad Days, look both ways and behind you at all times.

Vision zero,sounds nice,easy way to make a bundle of cash for the city in speeding tickets, yes I'm sure its all about safety,💡🚔🛂💰🛃🚔👊

The methodology the Daily News used is totally bogus. First and foremost, they cherrypicked time periods that would give the impression they wanted to (overall the trend is negative, not neutral). Then, they used the number of accidents as the unit of measurement, when the whole point of Vision Zero is to eliminate pedestrian FATALITIES caused by interactions with traffic. The very nature of how traffic calming reduces fatalities is by increasing the amount that drivers have to pay attention and be careful around pedestrians, which means (non-fatal) accidents will increase.

So take your pick - bitch about Vision Zero and have the ridiculously high number of pedestrian fatalities that we have in this country or run with it and have minor accidents with pedestrians increase, but fatalities decrease.

Who said they were minor injuries?

I bet there's a huge increase in tickets and late commuters!

It's natural selection. If you're vtoo fickin stupid to cross a street, too bad. And keep wearing dark clothing whenbyou jawalk at night you morons.

You want to save pedestrians? Make a 1000$ fine for jwaking. I am driving in NYC for a decade and can count in tens occasions when pedestrians run the red light or cross in the middle of the road at a distance that forced me to stand on my brakes.
This is easy to blame everything on drivers. Hey, Blasio, I know how to reach vision zero
goals - ban cars.
Morons.