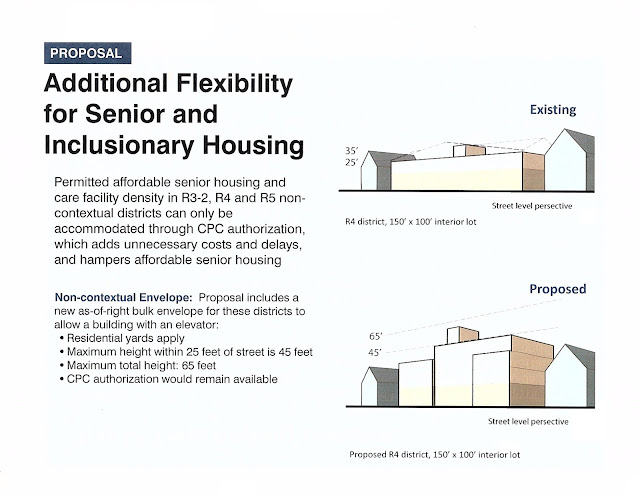 In an effort to tamp down the hysteria, city planning czar Carl Weisbrod extended the comment period in April and this month wrote a letter conveying the goals of the proposal, which he described as "promoting affordable housing and better quality buildings." Last night his agency posted profiles to clarify what the rezoning would mean for each of the city's 59 community districts. And it is chopping 10 feet off height limits proposed for some residential districts so that 95% of medium- and high-density contextually zoned areas would see height limits increase by five feet or less, or by one or two stories if affordable housing is included.

Contextual zoning protections were strengthened during the Bloomberg administration to prevent out-of-scale development, such as a six-story apartment building in the middle of a block of two-story homes. The effect was to limit the potential for more density across much of the city, which was already coping with housing growth insufficient to meet increasing demand to live in the city.


Contextual zoning does not limit the potential for more density across much of the city. First of all, only about 17% of the city was contextually rezoned over the last decade. Second, much of that was balanced through MASSIVE UPZONINGS in the Far West Side, Williamsburg/Greenpoint, Jamaica, LIC and other areas.


While the Bloomberg rezoning pushed up property values in the downzoned areas, tenants of market-rate housing saw rents climb. Housing costs have drastically outstripped wage increases for low-income and working-class New Yorkers in the last decade.


The contextual rezonings DID NOT push up property values in downzoned areas. There was no net change in property values. Rents are climbing due to an unregulated market of housing.


But the contextual zoning does more than just freeze the scale of neighborhoods. In many cases it makes it difficult for architects to fit all the square footage permitted by zoning into building envelopes constricted by height limits. Builders have compensated by making ceilings low or excluding affordable units.


This statement is straight out of REBNY, literally. They have to make ceilings low??? No: they can make ceilings the 8' minimum or they can raise them up if they choose.


On built-out blocks in neighborhoods such as Park Slope, the effect of the de Blasio plan, unveiled in February, would be minimal—first, because there’s no money to be made by tearing down a building to erect one that is five feet taller, and second, because historic districts are under the jurisdiction of the Landmarks Preservation Commission, which is not in the habit of approving the demolition of stately row houses.


Most of Park Slope is NOT landmarked. And that extra five feet could be the difference in building an extra floor on existing buildings.

Take a look at the illustration above. This gives you an idea of what the administration is hoping to accomplish with this proposed rezoning. Instead of "existing" being a low-rise senior facility, imagine a row of 4-5 low-rise homes. They will be bought up by developers and replaced with 65' monster buildings under the guise of "affordable senior housing". It's all bunk and I'm glad there are some people in this town that are calling BDB and his crew out on it.
Posted by Queens Crapper at 12:40 AM

Crappy you generally can't add a floor to an existing building. So a developer has to buy out four stories to build five. The math doesn't work out as well as when you can build three or four for each story you buy out. Unless a building is in disrepair and needs to be torn down anyway you won't see much construction unless you legalize 15-20 story towers. Which they should. The supply would trickle down, keep a few hipsters from pricing out poor people in Bushwick, East NY etc...

REBNY and the Dept. of City Plotting have been in cahoots since the get go.
The real move here is a little social engineering. Using the poor, elderly and ethnicity, they try to make themselves out as good guys.
Their real aim is overdevelopment and increasing profits beyond pig out level for the NYC real estate industry.
Now Wiesbrod has been caught with his pants down. Hey Carl, New Yorkers have wised up. Your old games don't work anymore.