DeBlasio not a fan of the first amendment 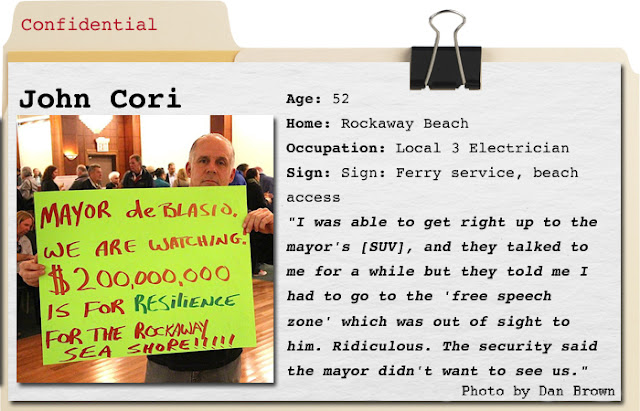 An electrician. A retired ConEd worker. A recruiter. A law enforcement officer.

These are just a few of the protesters whose messages are so disruptive to Bill de Blasio that his aides have been shooing them into a so-called "free speech zone" at the mayor's public events over the past few months — despite de Blasio's past defense of First Amendment rights.

The mayor's office has come under pressure for its so-called "free speech zones," which aides defend as a way to minimize disruption at de Blasio events.

First Amendment advocates, however, see the zone as an unseemly change for the formerly protest-friendly mayor, who has defended the right for people to protest issues ranging from Occupy Wall Street to the death of Eric Garner during an NYPD arrest on Staten Island.

The rules are different now that he's on the other side of the podium, many activists said.
Posted by Queens Crapper at 12:21 AM

DiBlasio is like a wet fart on a vanilla ice cream cone when it comes to speach critical of him,poor baby.

I guess tho only time to have two cities is when it only benefits Wilhelm. Another phony .........Jst like his buddy Fidel.

If De Blasio wants to erect a wall around himself,
and spit on the first amendment like a clueless, fearful, aloof French King, then get more vocal.
Remember this too....your most effective form of protest is at the polls.
Make sure you voters do not re-elect this most ineffective man!

The entire USA is supposed to be "free speech zone"!!!

True! Each voter has an opportunity and responsibility to use their brains.
Don't believe the campaign hype and promises that any political candidate throws around.
Learn to read between the lines. Do the same kind of product research you do when buying technology.
Start with WHO gave money to support a candidate. De Bkasio was made "King" by the real estate industry.
He lied to the voters about being a man of the people.
Depose the self made monarch!

He built a privacy fence around Gracie Mansion.
Now he imposes a "free speech zone" to keep peaceful protestors out of his sight.
It sounds like Der Mayor is paranoid about something.

And there is something about his pathological tardiness that is highly suspect.
Is De Blaz hiding some kind of medical issue?

The rare times when a reporter actually does their job when an issue like this concerns a Democrat it is like turning on a light and seeing the roaches scatter.

Imagine if Chris Christie did this. Or if Rudy Giuliani did. The roars of outrage and the reports would be deafening.

Typical Liberal. One set of rules for them, another for the little people.

Here's hoping someone gets their act together to run against this bozo.

Mayor Big Slow is a dangerous hypocrite, considering that some of the marches for police brutality had oppurtunistic violent jerks attacking cops and actually inspired an assassination of two cops taking a break. Those heroes were holding innocuous, inoffensive signs demanding renewed ferry service and necessary infrastructure improvements.

There is a lot of action going on in Rockaway right now. There has been a pilgrimage of "celebrity" chefs participating in some new restaraunts opening up there and there is that "bazaar" glommig up the boardwalk at riis. I suppose the Blaz thinks that the money Generation Gentrification brings is going to revitalize the town and prefers to let those protesters and the true citizens there wait.

Our Mayor is acting like a tinhorn dictator, I never thought all those charging him of being some pinko commie would actually materialize, it's truly not hyperbolic. And he is brazen about it.

I said it last week, this thin skinned giant ass hipster doofus has contempt for the people of Rockaway, all races and nationalities. Actually he has contempt for all true citizens of every neighborhood, since he believes transients and tourists know better than us and view him favorably.. If this guy gets reelected, Rockaway is going to become a resort for a lot of obnoxious hipsters and tourists.

Look at what's going on in Bushwick for an example.

These are truly New Bad Days.

Keep shoving signs in his fat artisan food stuffing face. Take a cue from those protesting at the Guggenheim and shower written papers on him protesting his oppression and false utopian policies

I forgot to post this, What Excellente Big Slow can do with his free speech zones>>>

A mayor should engender trust and integrity---not betray it with impunity. Some people actually miss Michael Bloomberg---but he was one of the most extreme chameleons to lead a colorfully double, predatory life who ever existed---and he'd STILL be grades better than this 'not hot' mess! Ugggh! Impeachment people---PLEASE---RIGHT NOW and FORTHWITH!

Not typical liberal. Typical politician. They're all scum.

Delete this 1st paragraph. It's a sophomoric listing of adjectives. With an unneeded exclamation mark to boot!!!!

The second paragraph was essentially your message.

at the Little neck Memorial Day parade ,I yelled for him to go back to Castro Communist Cuba. We don't need you in N.Y. The cops just smiled.

I worked for NBC-Universal as a musician and audio engineer
Recent mayors and high political figures after Ed Koch era have always made sure certain people not on "the list" are far away from cameras and news people.
To add -most all major news network people dare not say a word if they want to keep them permits and press access from "The Mayors Office" coming.
Don't place nice with the mayor and its bye bye press access, professional cameras and tripod permits. You are then on the "blacklist" and will likely lose your job or be re-assigned to low end bullshit.

Voters,thinking.....they won't even come to the polls. Ed koch must be laughing his ass off. The people have spoken,now they must be punished.

The old America used to be a free speech zone. Wake up! We live in a ersatz democracy where the wealthy rule. Hmmmm, isn't that really an oligarchy? It seems to be. Now let's see if the Patriot Act gets renewed. It is due to expire. What a field day the government has, using security as an excuse, to curb more freedoms of the past.

To Less is more:

No, I won't be eliminating my first paragraph---but, feel free to eliminate yourself from this panel!

Now, I don't need a lesson in English composition from anyone---least of all you! And I certainly didn't ask you to troll yet another thread that I'm following for unnecessary, unwelcome remedial instruction.

Therefore, stick to whatever it is that you do best (besides unsolicited criticism), and stay on topic here with the issue, while also controlling your impulses to dictate stern writing advisories against others like me, who are not interested in hearing your nonsense.

If less is truly more, then you can start by practicing what you preach! Now, who is sophomoric???

But, gone are the days of egalitarian rule, where a new era of staunch elitism now dictates how extreme wealth now determines worth (the Bloomberg transformation decade--and beyond). Now, garden variety millionaires are just quaint (I call them 'working millionaires')!

America is sadly no longer a democracy-governed Republic---it's a tri-brid experiment in seized government control: Dictatorship (City Hall), totalitarian monarchy (Washington and the White House), and government sanctioned Caste system that orders artificially low wages, and a redistribution of wealth that only creates the deepest wells of beggary, obscurity, quiet desperation and even more big government dependence (i.e., food stamps, section 8 housing, welfare, etc.)---ironically, even for an able bodied workforce, whose companies like Walmart, K-mart and Shit-mart continue to receive corporate welfare and monstrous tax breaks, when they should be taking care of their own employees, by way of salaries that keep pace with inflation, meritocracy and fair and reasonable health benefits and living wages, so that we, the ambushed, overburdened taxpayer would finally be able to see our taxes lowered!

But for the fact that these government entitlements exist (as they keep funding the welfare of corporate robber barons and oligarchs), these benefits would only be necessary for truly hardship cases---and not working families that are forced to rely on taxpayer funded subsidies. It's a vicious cycle of wealth redistribution---and the hardworking public be damned!

Alas, socialism is the ruination of a government body that has seized all control away from its purportedly free people---and the results are now visibly evident, in a lifetime of quiet desperation and growing dependence, for anarchy to prevail.

I could tweek that 2nd paragraph a bit as well. But I don't want to burden you. You're getting there Richard. Slowly but surely. Avanti.

Every time I see big Bill I think he's been somatized with prescription drugs for whatever condition he has.
He is dull, listless, out of focus. His mouth moves but there's no real motivation behind his speech. Maybe he's a Vallium junkie.

"I'm tired....so tired. Was that the alarm clock going off"?