Bushwick: the next Dutch Kills? 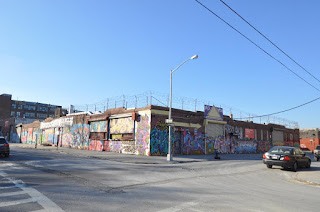 Developers think that Bushwick will be the city's next tourist destination, and after the neighborhood was named one of America's coolest by Vogue, they're probably right. Case in point: three hotels are rising in the neighborhood, the most recently announced of which is a 10-story, 144-room hotel at 232 Seigel Street between Bushwick Avenue and White Street.

Also coming to the 'hood is a seven-story, 112-room hotel at 71 White Street between McKibbin and Boerum streets that's being developed by All Year's Management. Riverside Developers, also behind Williamsburg's bonkers, cantilevering William Vale Hotel, want to bring a 140-key hotel to 27 Stewart Avenue between Flushing and Johnson avenues.
Posted by Queens Crapper at 12:16 AM

More victims for the project dwellers.

Time for the Attorney General to start investigating real estate brokers and developers.

Well, the artists and fartistes have moved in, so the yuppies will soon follow.
Then comes the mega development . As far as tourism? Better attend to the safety of this high crime area first.

Let's face it. NYC is running out of nabes to overdevelop.
Now they're scraping the bottom of the barrel. Mark my words. East New York is next.
And that's rock bottom!

This should not be.

Your move Deblasio, I think with this territory that these developers poached somehow, you could have fulfilled a big part of your goal for affordable housing in a short time.

It's obvious Mayor Big Pussy doesn't want to help the poor get a roof over their heads. He couldn't even convince Mario's son to replenish the roofs on NYCHA buildings.

Bushwick,,,spare me Vogue. Anna Wintour is a douchehag who hates the middle class and working poor who need quality homes and apartments.

Of course the city has no plans on increasing first responder staffing...

Eny will never be developed. Too many projects,and it borders bushwick.

To JQ: That is very well said! Also, I enjoyed the jab about "...Mario's son, and de Blah, Blah, Blasio's inability to secure desperately needed funding from said 'Mario's son' (who'll soon be the latest Albany jailhouse resident--keep up the good work, Preeht!), for NYCHA to finally get to work (did they ever?).

It all points to false, fake and failed leadership, and the endless loop of corruption and graft that has NEVER STOPPED betraying public trust and integrity. Now, as for you comment about Anna Wintour (of Vogue). Well, what can be said of someone who is now the embodiment of a caricature of herself? She is sadly 300% fake (and on steady decline, in her foppish, 'otherworldly' sphere of the rapidly disappearing world of print). Besides, she avoids me and my questions about the fur trade (and fears me), like I was radioactive!

What is truly sad here is how higher ups of purported trust, power and visibility continue to betray their roles in city and state government, with total contempt and impunity for the hardworking people who are always the last to receive any and all designated benefits that were already bought and paid for, by ever climbing taxes. And what do all of us get in return? Taxation without representation---again, still and forevermore!

The whole system of NYS government is corrupt and crooked---from the top on down!

Mr. Iritate-ano. Do you know how to be concise and brief?
I am not your college orofessor r eviewing your master's thesis.

To (yet another) Anonymous: I would like to lampoon your family name with the same contempt that your tired, lazy, third grade mind (of a slow child), just visited on me---but, that's right---I can't, because you are but one of many dozens of terminally annoying, passive-aggressive cowards hiding under cover, who employs puerile name calling to make an argument that is once again off topic! This is what free speech looks like, and I don't take directives from anyone (least of all a slug like you), to modify my statements in order to suit your personal learning disabilities and other deficiencies.

So, stop me if you've heard this before---but, unless you are being held against your will to read anything that I post, I'm not interested in hearing about your unsolicited dislikes. Frankly, I would be somewhat impressed (or more likely shocked), if you even made it to any level of undergraduate study, followed by graduation, let alone to any graduate school, that actually requires "whole book" reading and analysis!

No one is ordering and forcing your flat little head to read anything, so if you don't like to over stimulate your finite brain cells to read for less time than it takes to boil an egg---then STOP READING, and STOP COMPLAINING!!! The world doesn't revolve around your imperious demands, so get over it!

Also, your total lack of any pretense of originality in ridiculing my family name is SO, SO clever---I've never heard anything like it before, since I was two!