Cracking down on hydrant violators 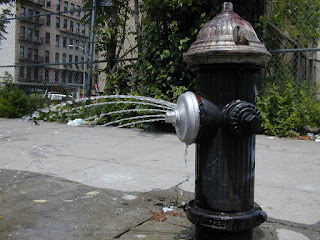 As summertime approaches with the promise of warmer temperatures, city officials are reminding Queens residents that they could face a stiff fine, or jail time, if they open fire hydrants without an FDNY “spray cap.”

Officials at the city Department of Environmental Protection (DEP) are again warning Queens residents that opening a fire hydrant without a spray cap can lower water pressure and make it difficult for firefighters to extinguish fires.

DEP officials also warned that the powerful force of 1,000 gallons per minute from an open hydrant could cause injury to young children.

DEP officials will be sending enforcement agents into neighborhoods throughout Queens as temperatures rise, to track down offenders reported to the 311 system and others caught using hydrants without the approved spray caps, agency officials said.
Posted by Queens Crapper at 12:19 AM

When I was younger, we always opened up the Johnny pump and sprayed the cars... it was fun back then. Nyc is not the same.

Well as usual the City is behind the curve. Lack of enforcement, ignoring issues, passing the buck and allowing small problems to fester into major issues. All of these issues that Crapper points out each and every day have been going on for years, but when you are reactive instead of proactive, shit happens.

Here's info on how to get a spray cap: http://www1.nyc.gov/nyc-resources/service/1097/fire-hydrant-request

Here's what may be a stupid suggestion, but here goes: Why not let the DEP enforcement agents carry a supply of caps with them in their vehicles. When they spot an open hydrant, turn it off, install the cap, then turn it back on. Most of the times it is just kids trying to cool off. I mean, how are they going to determine who opened the hydrant in the first place?

They will ticket Queens as the streets in the Bronx flow like Venice,why does the Bronx get a pass?

@Jackson Heights Johnny: That's such a reasonable suggestion, I'm surprised to see it on here. Far to reasonable to ever be implemented.

this has been going on in the ghettoes of NYC since I was a kid in the 60s. They'll never be able to contain it. It's a wonder we're not in a permanent drought.

Years ago, a friend of mine completed his medical residency training at Frankford Hospital in Philadelphia. He told me of a copper thief brought into the ER in critical condition. The guy broke into a live junction box on an elevated SEPTA rail line and tried pulling out some energized copper cable. He received a nasty electric shock, fell 30 feet to the roadway below, and was hit by a car. He sustained third degree electrical burns, a concussion, multiple lacerations, shoulder separation, several broken ribs, a broken pelvis, and a broken leg. The criminal charges that he faced were the least of his problems!

I am sure people find spike lee annoying, but this scene, which is not only instructional for spraycap substitutes, really captures what this city once felt like as the first post said, and comparably how it really isn't the same anymore. Unless you have disposable income.

Yea ok. I called in 311 over 5-7 times about an open hydrant across from my home and no one came to do anything about it for 2 days. Yes it was just spraying high volumes of water out for 2 days. Then on the 3rd day I see a little make shift barricade around it, but the water still flowing out now but not at as high volumes. WTF???

law enforcement cant ticket people from the ghettos for running an ocean of water down the street, they will just play the race card!!