The subway is a filthy place 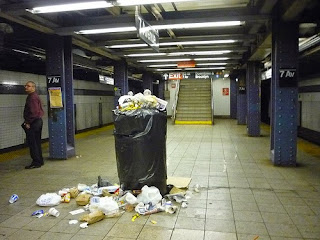 The subway system is nothing if not a dirty, smelly place. But it doesn't have to be so bad if the MTA stuck to its cleaning schedules, according to an audit from city Comptroller Scott Stringer.

The audit shows that tracks in seven stations -- just 3% of the 276 underground stops -- met New York City Transit's cleaning schedule, once every three weeks. More than half the stations got between four and eight visits from an 11-person cleaning crew a year, according to the audit of cleaning records between July 2013 and June 2014.

"The tracks have become appalling garbage dumps," Stringer said at a news conference outside of the F train stop at East Broadway. "The MTA has failed to clean them according to their own standards."

The MTA uses two vacuum trains to suck up litter on the tracks, with a $23 million contract out for three more. But the vacuum trains in use now can't get all the trash, because they run on a low setting to prevent damage to the tracks, according to the audit.

In looking at 33 station tracks before and after a vacuum train cleaning, there were pieces of garbage that stayed on the track bed. Meanwhile, equipment failures sidelined the vacuum trains for 188 days over the year studied, the audit found.
Posted by Queens Crapper at 12:41 AM

The MTA has the laziest workers on earth.

Getting more train service is a long term investment, I can understand, but for #$%^'s sake, they raise the rates and can't even hire more cleaning staff to improve on a 3% on-schedule cleaning? What a %^&*ed up agency.

Is the cleaning staff unionized?

MTA workers have a union that fosters laziness for high pay. It's not just a matter of cleanliness. It's a security risk. What could be hiding under a mound of trash? Kaboom?

People in this city are filthy! The mta does not have the manpower to get every scrap of garbage. It is the Responsibility of the people who choose to bring eat or drink or do whatever to dispose of their waste properly. If you see a garbage can like this one, why would you even attempt to keep putting more and more garbage on it instead of carrying your trash with you and perhaps finding another place to toss it? We live in a city filled with filthy people from other countries who are use to living in filth. Case in point, Jamaica and flushing. .....filled with hispanics and asians (indians, chinese and koreans!). Not to mention, all the high school kids that leave trash all over the buses.

More garbage on the tracks...

And yet, some genius at the MTA thinks taking away ALL of the garbage cans at stations and platforms in Queens and Brooklyn makes things cleaner.

According to the MTA web site, the program is a SUCCESS and will therefore be expanded!!!

If this is such a great way to handle waste, whoever came up with this idea should have all of the toilets in their house removed.

As the MTA web site advises, hey just take it with you!

An AM NY complaining about filth in the subway. Anyone else here laughing at the irony??

Friendly reminder that the MTA is a government-run operation.

We have to lower our standards of what's expected of them.

The subways are filthy because more than half of the people who live in this city come from third world filthy hellholes and do not care about keeping the place clean and tidy. The MTA can only do so much to keep things clean when they have millions of guttersnipes working against them. Go to other countries where the people are civilized and actually care about their surroundings and you won't find their train stations looking like the ones in NYC.

Take away the trash cans and the third worlders will just throw their crap on the tracks or platforms. That's what they did where they used to live, isn't it?

That was some quote, queens crap commenteresque, by the comptroller about the worst transit system in the world-the Neglected Transit Authority. The rats standing upright image just begs to be drawn or animated, even anthromorphed.

People are quick to blame, xenophobically of course, those foreign when the true perpetrators of the vile state underground belongs to the cheapskates upstate for denying much needed funds, the incompetent management of the NTA itself for their reliance on the banksters for debt relief, the irrational decision to get rid of waste bins and receptacles, and of course the idiots who insist on dining in the subway, the obvious offenders are the rice and chicken eaters and those with the starbucks which if you notice have become bodily accessories. And of course, there is too many goddamn people here!

This city has become, as with the populace, apocalyptic. It's literally bursting at the seams. Soon enough, something devastating is going to happen on the trains that, maybe, will cause those in charge to finally react and rectify the state of mass transit. Unfortunately, somebody has to get killed for action to take place.

The problem is not really the MTA (which sucks anyway), but it is the people and even though people want to scream racism about certain groups of people, but because of the huge influx of third world immigrants (who are used to their homeland being crap) are to blame, but the city also does not even bother to enforce litter laws.

For hundreds of years, Sweden has been a neat and clean country and until the migration of Muslims in the past few decades, didn't even have an anti-littering law on the books. In 2011 however, Sweden had had enough and finally passed laws giving the police the power to administer fines for littering. This has been seen due to the migration of third world folks into other parts of Europe.

All one needs to do is look at Queens, a once pretty nice and clean borough, but since the huge influx of third world people, garbage, litter, illegal conversions, cement yards and every other quality of life issue that did not exist until their arrival. But again when a city does not enforce laws and lets people do whatever they want (god forbid we would offend third world people and their slob behavior), then this is what you get.

"If you see a garbage can like this one, why would you even attempt to keep putting more and more garbage on it instead of carrying your trash with you and perhaps finding another place to toss it?"

I do my part by placing trash in the garbage. Let the MTA do theirs.

Commenter 13..... You are a retard! It IS your responsibility as a citizen to keep the place you live in clean! How do you know that the garbage can wasn't just emptied a few minutes prior to that? The mta subways get millions of riders every single day and if every single person in that station thinks like you and has just one piece of trash that they want to throw away, don't you think that the trash can would fill up very quickly? It's not just one or 2 people on a platform anymore, it's hundreds of people on the platforms! A trash can is only so big and can only hold so much trash in it! There isn't going to be just one person standing by a trashcan every second of the day just waiting for it to get filled up so they can replace it with another bag! So stop being stupid with yourself and take responsibility for your own trash. There are a million trash cans on the streets that you can go and find another one that isn't so full!

All transit is urban blight

I take the F train at 179 St every morning, and nearly every morning, at either the front car or the second car, there is one "cleaner" who does nothing more than make a big deal about him turning his key to let some passengers on. He will then either sit down and look at his cell phone, or talk to a passenger or other MTA employee. In 5 years the only time I've ever seen him performing cleaning duties is when there was an announcement that a cleaner was needed to clean a coffee spill in the first car. He took 3 minutes to get up off his fat butt to walk from the second to first car. He then demanded to know who spilled the coffee. When the "culprit" confessed, he started yelling at the poor guy as if he had done it on purpose. All this before the guy even went and got a mop.

Once he went back and retrieved a mop and made a couple of half-hearted swipes at the spill, he started in on the passenger again. When another passenger dared to speak up and said, "Hey, how about performing your job so this train can leave?", he started on him. Look for this guy around 6:00 AM any day at the front of the train at 179 St.

Your tax dollars at work.