DeBlasio to be grand marshal for Queens pride parade 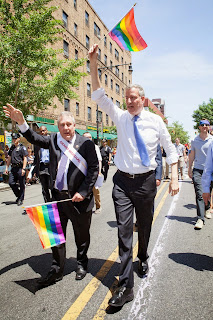 Mayor Bill de Blasio will make history in Jackson Heights next month as the first New York City mayor to serve as a grand marshal in the 23-year span of the Queens Pride Parade.

De Blasio will join APICHA Community Health Center as grand marshals of the 23rd Queens Pride Parade, which will be held on June 7 and runs from 89th Street and 37th Avenue down to 75th Street.

“When I founded the Queens Lesbian and Gay Pride Committee over 20 years ago, I was hopeful that we would increase the visibility of the LGBT community in Queens in a positive and impactful way,” Councilman Daniel Dromm said. “Having the mayor of the City of New York as our Grand Marshal shows just how far we have come.”

De Blasio became the first mayor to march in the parade last year, and even marched in 2013 while still serving as Public Advocate.

“The mayor’s presence is an acknowledgment that the LGBT community in Queens and throughout the city is visible, welcome and included,” Dromm said.

I wonder how many Memorial Day Parades these 2 will be marching in this year.
Posted by Queens Crapper at 12:45 AM

How late will he be?

What is the over/under for 30 minutes?

De Blasio is never up front about screwing us behind our backs. At least Dromm is more honest in that respect.
What a pair...Mutt and Jeff!

Big Bill lost the Black vote so now he's trying to cull the lavender vote. Bring along your ex lesbian wife and let's get real liberal!

The Blaz is discriminatory in his tardiness. He won't be late for this. The GLBT community is part of his progressive demographics, let's say his angle. Plus they are putting him on a throne.

Look at that big gawky doofus.
Now cringe at the fact that he is mayor of NYC.

Dromm is looking a little seedy and long in the tooth these days. Isn't that verboten in his world?

Will his wife march with him or with some lesbian group?

For THIS he will prompt.

My guess is that this will be the first event he will be early for. Hell, he and the family will probably be the first ones there, in full, um....let's say festive, regalia.

Too Much Beans said...

DeBlasio to be Grand Asshole for Gay Parade.

Blas won't march in st Patrick because of discrimination yet gays HATE Christians
Double standard Or Could it be st paddy's parade is too White,
You know a lot of those Irish are cops

I wonder how many Memorial Day Parades these 2 will be marching in this year.

And if either of them march, will they be shouting out, "Happy Memorial Day"?

Di Finocchio will be in his proper environment for a change.

Remember when gay was happy and fag was a smoke. Oh the good old days.

Can't wait for this homosexual parade. Men with silicone in their chests prancing around with wigs and skimpy attire covering their dicks.

This is normal? This has to be celebrated?

I accidentally ran into this parade a couple years ago
Two words:HOLY SHIT
Men running around "jungle dancing" in wigs and G strings is an understatement. These Fanoogs get real crazy rowdy and nasty when in large numbers.

The mentally ill mayor should be ashamed of himself he really needs to be in some kind of treatment facility .

Anon nos. 21 and 22: Apparently you've never been on the LIRR after the St. Patrick's Day parade.

He did turn a lesbian back to straight,must be hung like a donkey

Anon No. 25: Only for people who make a fuss over it like you. For everyone else, it's a matter of the sun rising in the east in the morning and setting in the west in the evening.

Too bad I cannot have any pride in Bill De Blasio being my mayor.