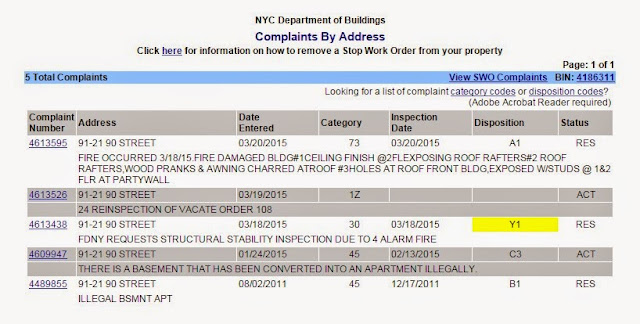 So there was a fire in Woodhaven recently that left a bunch of people homeless and was started by a disgruntled tenant. There was an illegal apartment in the basement since at least 2011, but DOB didn't force them to remove it.


On Wednesday night the owner of the home where Lopez was living ordered him to vacate the premises, according to officals. About 10 minutes later, the landlord and her boyfriend smelled smoke. It took them several attempts to escape from their basement apartment after the door was blocked from the other side, prosecutors said. As they fled, they allegedly saw smoke and an orange glow from the first floor bedroom where Lopez lived.

Perhaps Jake Dobkin might want to weigh in on this one.
Posted by Queens Crapper at 12:33 AM

There ya go. Our politically correct politicians putting firefighters in danger of their lives. And what has FDNY Commissioner Nigro said to them about this?

I don't think the apartment would be considered illegal since the landlord is the one living there and not renting the space... Loophole?

If your certificate of occupancy does not allow a living unit in the basement, then it's an illegal conversion and occupancy is prohibited. It doesn't matter who lives there or if they're collecting rent for it.