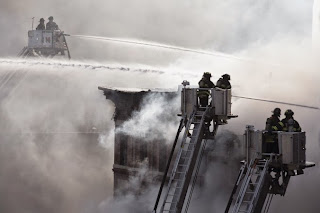 An hour before an apparent gas explosion sent flames soaring and debris flying at a Manhattan apartment building, injuring 19 people, utility company inspectors decided the work being done there was faulty.

The powerful blast on Thursday in the East Village caused the collapse of three buildings and fire damage to a fourth, the fire department said. It left four people in critical condition, more than a dozen others injured and one family searching for a loved one.

Firefighters worked through the night to put out pockets of fire, pouring large volumes of water over the rubble, a fire department spokesman said Friday morning as a steady rain fell.

He said when a building collapses it takes much longer — even days — to put out all the fire.

About 200 firefighters and medical staff remained on the scene.

The blast caused three five-story buildings to collapse within a few hours of each other, the spokesman said. A fourth, seven-story building, suffered extensive fire damage.

Mayor Bill de Blasio said preliminary evidence suggested a gas explosion amid plumbing and gas work inside the building that collapsed was to blame. A plumber was doing work connected to a gas service upgrade, and inspectors for utility company Con Edison had been there, company President Craig Ivey said. But the work failed the inspection, partly because a space for the new meters wasn’t big enough, Con Ed said.

I didn't see any permits for any type of gas line work, but I'm not sure what is required when a plumber is involved. The contractor was already in deep doo-doo before this happened.
Posted by Queens Crapper at 9:17 AM

Enforcement of stuff like this is not important as clearing a number of lots for a new building.

Contractors are already lining up to bid on the buildable lots!!

How about a nice homeless shelter and some affordable housing for those lots.

Crappy, looks like the gas line work on job was self-cert.

Contractor is from Yugoslavia. That's a Serb or Croatian name

What height does the zoning permit . I will bet it Is much more than five stories. Bingo....there ya go! Somebody benefits from building a high rise after the lot is cleared.

Looks more and more like someone was either working without a permit and/or doing unlicensed work:

Another unscrupulous contractor. Lock him up!