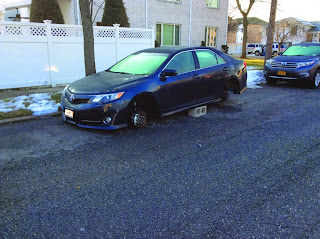 Anticrime Unit cops in the 106th Precinct this week nabbed three men who allegedly stole all four rims and tires off a car in Howard Beach, according to police.

To bad the mob didn't catch them,case closed,justice served,oh how I miss the old days!!

Good. They struck by 80 Street two weeks ago. Chop off their hands!

They should be treated like horse thieves in the old west.

Seriously, you mess with someone’s care you are messing with their livelihood.

Yes, Anonymous, mob style justice. In fact, the mob bosses themselves (and their henchmen), were the ones who wrote the book on how to steal (everything), that instantly created fear and paralysis for working people who were forced into making monthly extortion payments, among an organized network of graft, murder, illegal drug sales and distribution, and a host of other heinous crimes that created human misery that overburdened an otherwise civilized society. Also, their rampant crime rings served as a "How To" template for everyone else to steal. Unbelievably sad, but undeniably true.

Let the Howard Beach mob beat the crap out of them. Justice grinds slowly. Mob justice is more rapid and certain. That ought to discourage tire snatchers.

I am heartened by the number of charges. I hope it translates into some serious jail time.

Those sons of bitches, I had the 4 fucking wheels taken off my car too in howard beach. hope they teach those assholes a lesson. Sorry for the rant, just upset that occurrences like this happen in such a beautiful neighborhood.