Developer offers to save Catholic school 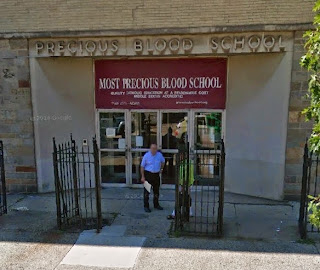 A Queens real estate investment and development company has offered to help save Most Precious Blood School in Astoria through either the purchase of the parish’s parking lot for $10 million or a combination of donated renovations and additional funds.

“In the alternative, we could transfer $10 million in cash for your restoration purposes or other projects and in exchange we would develop the parking lot at 32-01 36th Street,” it says. The parking lot in question is at the intersection of 32nd Street and 36th Avenue next to the school.
Posted by Queens Crapper at 12:38 AM

The Devil is in the details. We know exactly what this developer is up to.

Developers have no scruples . Now they are trying to swindle the Catholic Church . How revolting!

And the Brooklyn diocese will take the money and still let the school close.
They don't want to be in the school biz anymore.

Just take the free money. Don't sell the parking lot unless it is the only way to save the church and school

This idea has been floated around for some time. The problem with the school is that its made up of mostly non-parish parents.

Mustards of the Seed said...

The same way Halleran's mentor did with P2 AIG?

Don't sell the parking lot. Parking is getting harder and harder in the city.

Devil = real estate developers. That is 2015 NYC in a nutshell. I wonder how many cash offers other churches are getting? Cemeteries?

Nothing is sacred in the NYC real estate gold mine.

BINGO, they are just as dirty and underhanded as the developers !!!
They want to be in the landlord "special School" buisness like they did St.Leonards on Melrose street.
I wonder what kind of "special school" has armed guards and steel bar turnstiles, followed by layer's of steel bar doors.
I went to St.Leonards, my mom was also a teacher at that school and she experienced so much run-muck nepotism hostility, underhandedness, corrupt nasty shit, drunkenness, crazy nun's beating kids with broomsticks and smashing heads again blackboards, she quit and put me in public school.
If they hated Black, Spanish and Italian kids that much why did they take the parents money ?
I have refused to attend church services since 1976, not even for weddings, funerals & baptisms.

Mum (now 82) says that Brooklyn diocese "pack" can not be trusted with anything and all belong in jail or Bellview in her opinion.
Yes --they will jump at anything that brings in more tax free $$.

Yeah, those nuns were quite the number. Those were great days. Cardinal Spellman, the Legion of Decency and no meat on Friday.