Immigrant defrauds his own 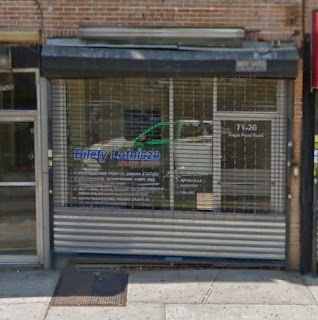 A Ridgewood-based travel agent allegedly stole thousands of dollars from an undocumented immigrant in return for procuring legal immigration status for the individual, who was actually working as an informant, prosecutors announced Wednesday.

“In this particular case, the defendant is accused of being a con man who unscrupulously exploited an individual looking for help in achieving his American dream but ultimately found only an American nightmare,” Brown said. “Anyone who believes that he or she may have been a victim of the defendant’s alleged scheme is asked to contact my Office of Immigration Affairs at 1-718-286-6690 or my Integrity Unit at 1-718-286-6524.”

Buczynski was arraigned on Tuesday before Queens Criminal Court Judge Bruna DiBiase on a criminal complaint charging him with third-degree grand larceny and second-degree criminal possession of a forged instrument.
Posted by Queens Crapper at 7:35 AM

That whole neck of the woods is rife with corruption and thievery.

The DA didn't report to Homeland the illegal "undocumented immigrant?"

If hes undocumented he shouldnt have been here in the first place. I for one dont feel the least bit sorry for him. Its criminals and lawbreakers like him that make the rest of us look bad. Send him back to Poland along with whoever brought him here just for good measure.

In a New York Times ambush interview...probably prompted by the clubhouse machine...council member Julia Harrison truthfully spoke her piece. Describing the likes of criminal Tommy Huang..."bilking their own kind"....she was immediately branded by her political enemies as "anti Asian". The NY Times Asian reporter wrote the article made sure that Harrison's remarks were printed out of context....likely at the behest of Harrison's political ememies. Does the name Stavisky ring a bell? Now Toby is led like a bull with a ring through its nose by the Democratic machine. Harrison was guilty of practicing reform politics, whereas Stavisky, Mc Laughlin were practitioners of shady politics as usual. They never bucked Tom Manton or Joe Crowley...Dem machine leaders.

You're expecting far too much from our recalcitrant, liberal government sympathizers, all of whom appear to protect and encourage illegal Third World labor, Annonymous. Why would any illegal immigrant fear a DA or INS agents, when they've been allowed to work and live here since the late 1970s, without any policy enforcement? And we, overburdened taxpayers' and an obscenely displaced workforce continue to pay the price of corporate greed and corporate wage slavery (not to mention corporate welfare and 45 years of corporate outsourcing) with the blessing of government sanctioned complicity. I though We, The People were government? Alas, if this isn't a prime example of dictatorship-style Neo-fascism and police state enforcement, that I don't know what is! Constitutional freedom and democracy? Where???

Who would go to a travel agent for legal advice? At least go a notary public!

Go into Maspeth and you can't swing a dead cat without hitting an illegal from Poland.

I don't see where it says the defendant is an immigrant. Is that reported elsewhere?

And no, poster 2, this is a sanctuary city that does not tell the feds when illegals are arrested. They're quite proud of this.

Dariusz Buczynski... Not an immigrant? Yeah, ok. The first people immigrant con artists rip off when they get here is their own people.