Massive development going up next to LIC Clock Tower 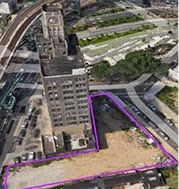 Kevin Maloney’s Property Markets Group is planning to build a 70-story mixed-use tower at the edge of Queensboro Plaza in Long Island City, according to an application filed with the city’s Department of Buildings today.

Maloney’s company also recently purchased the Long Island City clock tower building next door, a point of contention with preservationists in the area who want to see the building landmarked.

A Manhattan developer plans to erect a 70-story apartment tower in Long Island City, Queens, that is four times bigger than what the site was zoned for, according to public documents reviewed by Crain’s.

Property Markets Group has proposed to build a 930-unit residential building along 41st Avenue, near the corner of Bridge Plaza North, that will clock in at 830,000 square feet, The Real Deal reported Wednesday.

Property Markets Group already owns an adjacent site, which is home to the Clock Tower building. But even if that property were combined with the site of the proposed tower, there would still not be enough square footage to build 70 stories tall.

To do so, Property Markets Group could have acquired unused development rights from an adjacent site controlled by the Metropolitan Transportation Authority.

That parcel of land borders Property Markets Group's parcel to the northeast, and is being used in conjunction with the MTA's East Side Access project. The plot likely holds more than 1 million square feet of unused development rights, according to a Crain’s estimate, and could be the source of the project's extra height.

The MTA declined to comment.
Posted by Queens Crapper at 12:42 AM

This is the new face of LIC. Nobody can halt the onslaught. Money talks. Bullshit walks. The LPC will not grant the clock tower landmark status. They have become the handmaidens of developers. Queens is a backwater borough to them . The tower is not the Empire State Building and would not meet their "criteria", whatever the F--K it is, for holding a hearing. Say, "Goodnight, Gracie" to the tower. Between Pete "junior" Valone and Jimmy Van Bramer, expect to see more history vanish.

Is Jimmy Van Bramer going to protest this?

more hipsters bitching endlessly about how crowded the 7 is.........well wadda u expect?

All this development seems ass-backwards to me.

The smart way to do development: check it out here. No? Am I right or wrong? What do you think?

...bitching endlessly about how crowded the 7 is.

And the Worst Fucking Transit System in the world is complicit in this abominable deal.

This is going down despite the public's new found cognizance of over-development and the now daily breakdowns of signals and rails on the 7 and the subway lines in the area.

Mayor Big Slow is nowhere to be found on this, in fact he went to Wisconsin for some b.s. convention for spineless liberal thinkers who don't fulfill their promises. Apparently, Mario's son doesn't seem to mind this monolith dwarfing the clock tower but the railyard he doesn't want touched. Yet.

These motherfuckers are trying to remodel this city and the boroughs in a way that won't possibly be manageable, and if the construction starts will be downright hazardous for the environment, traffic and people commuting once they put the field offices and cut off sidewalks and 2/3rds of the road.

This has to be the tipping point.

Can you spell Affordable?

I stare in disbelief at how all Queens residents have especially lost so much power and freedom in a borough of ever climbing taxes (versus taxation without representation), but where we've apparently stopped expecting, demanding and insisting that our antiquities are provided for and taken care of with the respect and integrity that so richly deserve. Alas, America is still a young country, but if we don't preserve, conserve, repair and maintain whatever precious remnants that Queens still has to showcase in this heavily entrenched borough of corruption, graft, greed and assimilation failure (by its newly arrived, and not so newly arrived immigrants), then we will continue to be a borough that carries an adverse label of caution and undesirability, in this second decade of 21st century advancements, that are skipping over us with speedy precision. In the 20th century, Queens County was known as the borough of cemeteries. Now, nearly 100 years later, it's the borough of the death of honest, ethical political leadership (that leads by example), where nothing here can healthily grow without the stench of corruption polluting everything in its wake. For these unbelievably sad reasons and more, it's no wonder, then, that Queens officially remains the Fourth World!

We are all "right"' George, but it's the wrong guys that hold all the power and money to crush us "right" guys. The only time we have power in our hands is at the voting place or in the bathroom when we reach for a sheet of "bathroom tissue" to wipe ourselves clean. Wipe out your crooked local reps at the polls. That's the way government gets a clean ass! Think city wide but act locally. Who is your shady council member...Paul Vallone?

70 stories is so wrong, so immense, so out of place with anything nearby, that in any sane place, the idea would have been immediately dismissed as a joke. But this is Queens. A developer buys the right people, makes a deal, City Council members mumble some shit about growth, diversity, renewal, affordable and other lies, and then we have a hideous monstrosity to live with. They go back to their own neighborhoods and try to figure out how to not let it happen there.

Putting a curtain wall (or conventional)tower this size above an east river tunnel is suicide.
You KNOW somebody will fuck up or it will be a terrorist statistic.

I think the developer is using tactical propaganda to demo that clocktower.
A 700 foot tower would blind some of LGAs (VOR) Omni Directional Radio Range VHF radial beacons approaching aircraft 20-30 miles use use as a backup to line up and hit the runway straight.
(in layman's terms its cutting spokes out of you bicycle wheel)
I'm sure somebody must know this.
Must be REALLY BIG "bag money" going on under the table this time to place so many lives in danger.

No can do
A 700 foot tower at that location would be considered an obstetrical inside LGA southwest quadrature VOR 3 degree glidescope decent cone and WORSE danger for East river air traffic navigation.

This developer is testing the city council members intelligence and playing games to see how much shit he can pull !!

Complain to Melinda Katz and see what that gets you. She's the developers' courtesan (uh....slut...if you prefer)!

Soon to be ex-patriot said...

Tear it down. Save the clock and place it next to those "sacred" millstones. This borough is becoming a millstone around my neck. Next year I' m scheduled to move to Brooklyn.Are you tired of Queens' Grande 'Ol Opry show? Consider Brooklyn or even the Bronx.