Not everyone on board with BdB's housing plan 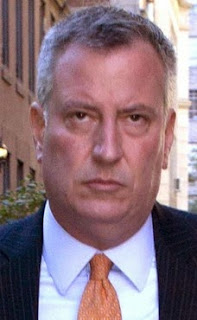 Brooklyn Borough President Eric Adams is siding with industrial businesses in their quest to keep housing out of areas zoned for manufacturing.

In an op-ed at CrainsNewYork.com, Mr. Adams wrote, "The success of [waterfront] communities depends on affordable and worker housing near (but not in) these industrial zones."

He added, "Our communities along the Brooklyn waterfront have long been working-class neighborhoods. We need to grow our options for affordable and worker housing in these areas so current residents can stay and people moving in for jobs can find a place to live that is within budget."

Industrial businesses generally don't like residential encroachment because it increases rents, limits their growth and triggers complaints about their operations. Mayor Bill de Blasio has worried manufacturers further by signaling his intention to rezone some industrial zones to include housing.

Several dozen members of various community groups organized under the coalition of “Real Affordability for All” gathered on the steps of City Hall to voice their concerns about Mr. de Blasio’s housing program, which aims to build and preserve 200,000 units of affordable housing over the next decade. Many were glad the mayor was giving more attention to the affordable housing issue than his predecessor, Michael Bloomberg, but argued the de Blasio administration, particularly in East New York, Brooklyn, needs to slow down the rezoning process so residents in the area can have more of say in how their neighborhoods are reshaped. (Hence, the “slow it down” chants.)

Members of liberal organizations like Make the Road New York, New York Communities for Change, Faith in New York and Community Action for Safe Apartments (CASA) said the mayor’s plan to rezone 15 neighborhoods was welcome but could displace longtime residents if too much market-rate housing is built. The labor-aligned organizations called for more unionized jobs in the neighborhoods targeted for rezoning–like a swath of land in the Bronx around Jerome Avenue and Flushing, Queens–and other community benefits, though their demands were not always concrete.

Many just did not want a replay of the Bloomberg years, when mass rezonings transformed working class hubs like Bushwick and Bedford-Stuyvesant into coveted, affluent neighborhoods, forcing poorer residents away. The Department of City Planning hopes to certify the rezoning application for East New York sometime in the spring, beginning a lengthy land-use review process that could extend through much of 2015.

But that pace is still too swift for many advocates, who otherwise align themselves with Mr. de Blasio.
Posted by Queens Crapper at 12:38 AM

His ten year plan builds twenty percent more housing than went up 2000-2009. Not enough if you want to put a dent in prices.

One concern with affordability is all the old buildings that get knocked down for new construction are generally the least economically productive today - the cheapest rents. One way to deal with that is to require that any construction that displaced existing housing set aside affordable units with square footage equal to prior structure, in addition to ten percent or so of the additional housing built. To make construction financially viable you have to make larger increases in density than otherwise though.

I said square footage instead of units because there is a shortage of small homes, forcing many low income people to have roommates, in some cases they'd be better off alone. NYC caps dwelling units and buildable square feet, relaxing the limit on dwelling units holding FAR constant would make smaller units more economical than they are today.

Born piss poor in the Bronx,
Quit school end of 11th grade
Worked hard,2 jobs no one ever helped me because I was thought you work for what you want and get what you work for And when did taxpayers become responsible because You Failed!!
Pathetic Bastereds.

This city should start deporting if they want more space available. This whole affordable housing thing is garbage. It's just going to overcrowd schools and overburden public services. This city is way too crowded as it is. Large populations become a huge safety hazard.

Very few voters are on board with anything that this big dummy has to say. He is just pleasing his wife so he does not get thrown out of bed.

Pictures of him make my skin crawl.

This may be just a smidgen of hope as the residents and genuine liberal groups become disillusioned with the cowardly duplicity of Mayor Big Slow. I personally find it amusing that they were chanting slow it down to him, since he only seems to make an effort to please his developer and hedge fund benefactors than the people who have to live there still and have the damn right to live there, even living amongst the recidivist criminal pricks, whom if they channel their energies towards the real enemies and threats would stop gangbanging and start organizing with their neighbors.