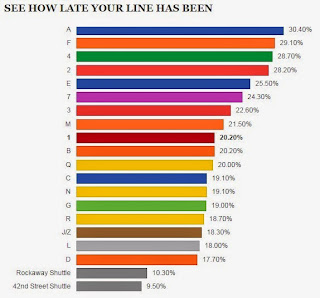 You're not imagining it — your commute has been off the rails recently.

Delays increased on most subway lines in 2014, with about 20 percent of all trains on the tracks arriving late to their stations and medium and major delays increasing sharply, according to MTA records.

The problem was the worst on the 5 train, which saw 32 percent of its trains delayed.

The news coincides with a fare increase this past weekend, taking the basic fare on the system to $2.75.

Experts are divided on what's been bringing your ride to a screeching halt, with MTA officials pointing to a surge in ridership and commuter advocates blaming a lack of funding for needed infrastructure repairs.

Hmmm...surge in ridership? So we shouldn't have been upzoning all those areas near a subway?
Posted by Queens Crapper at 12:19 AM

Most trains are delayed because of too many people trying to crowd into the train. People don't utilize the platform as they should be either. They just stand right by the stairs and most of the time there is plenty of room at the other end of the platforms. The mta is becoming a real mess. I remember taking the trains years ago and sometimes being the only person on the platform in certain stations ....those days are long gone though.

Some platforms are really narrow at the ends, and when there's a huge crowd, it's safest by the stairs. There also the fact that there aren't enough exits at some stations. E.g. If your station only has one exit near the last car of the train, you probably won't go all the way to the front of the train and then have to walk the length of the platform to exit.

The London subway runs trains every 3-5 minutes. It's clean, safe, and efficient. NYC's subway is pathetic, inefficient, and rife with corruption.

No shit, Sherlock. Between a decaying system and overdevelopment of Queens' neighborhoods, it is a wonder that it is working at all here. Bloated with the weight of humanity that we cram into our trains, more stress is put on the system. Do developers care? No! They take their quick cash and return home to leafier environments.

Some platforms are really narrow at the ends, and when there's a huge crowd, it's safest by the stairs. There also the fact that there aren't enough exits at some stations

IF people would just keep moving down instead of standing by those stairs, then there would not be huge crowds!! I go on the 59th street platform EVERYDAY and this is a problem!!

If the MTA were doing their job, they would seek solutions to overcrowded trains. People need to get home, somehow, and it should take them under 2 hours! I dare the MTA bigwigs to try to get on an E train at Fifth Avenue, Lexington, Ely or LIC during rush hour!

even the shuttle trains suck, even the times square shuttle which is the most useless route in the system. It literally is faster to walk.

No surprise the tops are the A E and F since they make the most stops in queens and brooklyn, although the E is express its value is negated because it goes all the way east to Jamaica and its line has been curtailed by the M train.

It's the worst fucking transit system in the world bar none. Also the smelliest.

It also shuts down completely every night for five hours (more on sundays) so they can clean and repair.

Do you know how bad people would flip their shit here if they cut off the subways as midnight???