Because what NYC needs is more people on welfare 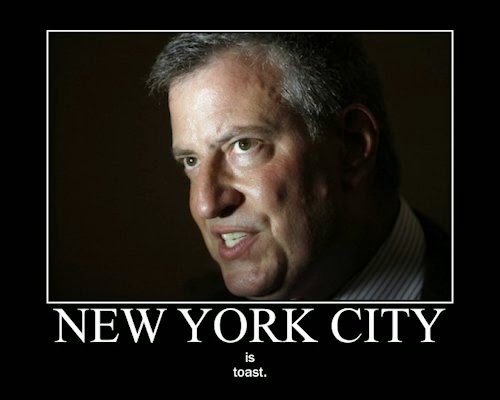 Welfare is making a comeback under Mayor de Blasio, with 13,000 more New Yorkers on the dole by the end of his first year in office, according to a new report obtained by The Post.

Enrollment in the city’s cash ­assistance program swelled by 4 percent in 2014 to 352,596 — one of the biggest increases in more than a decade, the Manhattan Institute found.

The rise comes even as the city’s economy has prospered — some 90,000 jobs were added in 2014, according to the “Poverty and Progress in New York” report ­being released Tuesday.

“If government dependence on welfare is rising in a good economy, what’s going to happen in a bad economy?” wondered study author Stephen Eide, who said the trend was antithetical to data dating back to around 1960.

With Banks at the helm, the HRA launched a series of sweeping changes in its state-approved Biennial Employment Plan, including changing requirements for welfare recipients with kids younger than 4 years old. Recipients previously had to clock a 35-hour workweek to get their checks.

The de Blasio administration is also phasing out the Giuliani-era Work Experience Program, which gave welfare recipients jobs in city agencies, in favor of “additional job search, work study or internships for cash assistance clients with recent work histories or with advanced degrees,” the report notes.
Posted by Queens Crapper at 7:44 AM

Buying loyal voters 1 EBT Card at a time,
NY deserves everything it gets because it elected the Blas!!!

I think you have that last one backwards.

Hitler was the head of the Socialist party in Germany. (National SOCIALIST German Workers Party)

Stalin was the head of the Socialist party in the USSR.
(Union of Soviet SOCIALIST Republics)

So Bloomberg was preparing the city for a mlionlre people, and Diblasio want to make sure they are all on welfare. Great.

You needed a f*ck up to get a leader, who will we turn to to fix the DiBlasio disaster?

By any realistic measure Guiliani improved this city. If you don't remember the peak murder rate in 1990 (2607, or over 7 per day) you don't really have a proper viewpoint to judge the groundwork being laid by DiBlasio to bring us back to those days.

If you don't like his politics, fine. Comparing him to a trio of socialists I find very strange. DiBlasio is the socialist. You also dishonor the true victims of socialism. Guiliani had no camps or torture centers.

Wait two more years. You will see in the crime, quality of life, and increased welfare rolls in an economy that is growing (see this story) to see the insidious damage DiBlasio is doing that will have to be undone to rescue this city.

In defense of Dinkins, he was handed a barrell of trash that he couldn't fix. In respect to DiBlasio he was handed a decent city with a mild economic downturn and has steered the Titanic towards the social welfare and special interest (cop hating) iceberg.

All we need now is a Republican candidate or a Democrat candidate to switch parties to undo some of this damage.

Fluck him, Charlene, Sharpton, and the whole cop-hating bunch of them.

All socialists dream of having billions to squander on their harebrained/vote buying rackets and schemes. DeBlasio can make good on this due to soaring tax collections from real estate taxes. Remember crazy Hugo Chavez? Oil revenues allowed him to "go nuts" like in an old Jerry Lewis movie.

DeBlazzzzz will do the same and is doing so already

Wins the award for the best comment of the day!

And legal immigration status is no longer a qualification for welfare, housing, etc. How many hundred of millions live in extreme poverty in Latin America? We just need to hope there isn't a tsunami like stampede across our border.

What ever you say about this man, remember his enablers are city council.

Preparing for a GED is considered "full-time education"?? How many hours a day do you think these scholars study for that exam?

His minority wife is the socialist. Bill is tied to her apron strings. She runs city hall. If he bucks her , she will take Dante and leave. Then Bill will have to go back to cruising for dates.

The true welfare recipients are the affirmative action directors and supervisors at the NYC Dept of Social Services/HRA/Medicaid. The majority of blacks employed HRA- Welfare-are women with an attitude that they have the job as divine right, their forty acres and a mule. Their comeuppance for slavery and being born Negro.

These lazy women do the barest minimum of work each day and drive off the job anyone who is not black or an immigrant. The supervisors glad hand, read newspapers, magazines and play on their phones all day only to get up to harass any non black employee that might have slipped in. See how horrible whites are to blacks? No, I don't see that. I see the racism that blacks perpetrate on whites.

Affirmative Action has ensured that unprofessional and unqualified black women will rise to the top of the food chain at HRA. There are so many arrests at this agency for fraud and theft. Last one was $1.3 Million Dollars.

Enabling unprofessional black women with rotten attitudes and hatred of all whites, is the fake union, DC 37. Two huge elephants in the living room that are costing NYC if not millions of dollars, billions.

When you see an older homeless or homeless mentally ill person, think of what has NOT been done for them by the so called Welfare Worker.
To end welfare as we know it, get rid of the black mafia at HRA.

There are parties for City employees, the city gives $5 a head for each employee. Yet the HRA employee is charged $10, half don't attend to eat the greasy cheap ghetto food served AND ghetto snack foods are sold every day to supposedly pay for the parties. Then there are the endless raffles, that no one wins. Yes. the money is rolling in at HRA. Just not to those on government benefits. It's for the employees of HRA.
Much is made of HRA being a multi cultural agency. It is not. It is a uni-cultural agency. There is a white figure head who doesn't want to know about the crimes being committed on his watch by black women employees of NYC Department of Social Services/HRA.

Welfare... HRA. The rolls are swelling due to the bars being lifted on illegal immigrants. Everyone is now eligible for NYS benefits.
The majority of employees at HRA are extremely overweight, uneducated black women. In the mix is a lot, too many of Caribbeans, with their hostility towards America and Americans. This group is extremely aggressive, attend grad school on the City's dime and climb the ladder at HRA.

The biggest scam going is a job at Welfare. The young black women brawl on the job, have sex in the bathrooms with security guards and janitors. The rest of the black women welfare workers walk around talking on their cell phones or hanging out on facebook. they have no time to do their cases because they are responding to facebook posts or shopping online.

One woman called to HRA HR office for shopping online during work hours explained away her shopping fix was due to her nervousness and anxiety. That women is still employed at HRA.

That last poster should contact the Department of Investigation.