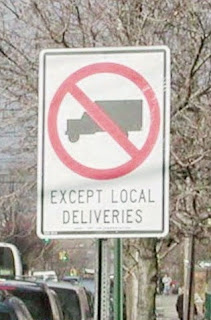 On March 3, the Transportation Committee heard Councilman Paul Vallone’s bill, Intro 315, aimed at curbing the illegal truck traffic that plagues many residential streets in his and many other districts. Trucks are a vital part of New York City’s economy and serve millions of residents and businesses through making deliveries and providing transport and services; however, many streets in the city are not designed to handle such traffic. Trucks are generally not allowed to use non-designated routes.

However, due to a Department Of Transportation (DOT) policy that discourages negative signage to be placed in the City of New York, commercial trucks have flagrantly used residential streets to speed up their routes knowing that the New York Police Department will often not issue violations because of the lack of this “negative signage.” Vallone’s legislation would require the Department of Transportation to conduct a study of compliance to the rules of the City of New York by truck drivers relative to truck routes every three years, and rank the 10 blocks within each community district where the largest number of trucks illegally disregard required truck route destinations. At such the department shall post a sign or ensure such a sign remains, stating “No Trucks Except Local Deliveries.” The Department would also be required to post the locations of these signs on their website.

“Unfortunately, in an attempt to beautify the neighborhood by avoiding negative signage, you end up instead with trucks and tractor trailers plowing down residential streets, polluting with fumes and noise and endangering residents."

Signs are not required for ticketing. Instead of Vallone giving in to lame NYPD excuses, he should be calling out the department for being lax with enforcement. If ticketing is not a priority now, it won't be after more signs are posted. And DOT is not interested in "beautifying" neighborhoods. More trucks plowing through residential streets is considered good for commerce and DOT's policies reflect that.

This fellow, while seemingly well-meaning, is focused on the wrong problem here.
Posted by Queens Crapper at 12:15 AM

I guess the trucks are waking up Don Vallone in his cozy north Flushing nabe at night. Otherwise he would not give a crap about quality of life issues. He is too busy lobbying for his developer clients. Overdevelopment is destroying our residential nabes worse than illegal alternat truck trafficking.

The only way to draw a red line through Stinky is at the polling place.