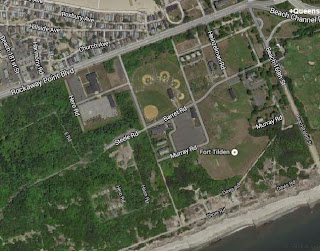 The government has been looking for input on rehabbing popular hipster summer hangout Fort Tilden, but hearing from locals isn't enough, so it wants feedback from summer visitors as well.

The National Parks Service is only in the initial stages of the process of changing access points and replenishing the beach inside the Gateway National Recreation Area, which was badly damaged during Hurricane Sandy, officials said.

The NPS sought public input before construction begins, but have only heard from area residents and local fishermen, according to a Parks spokeswoman, Daphne Yun.

Yun said she hopes to get the input of other groups that use the beach like day visitors from around the city who tend to flock during the summer months.
Posted by Queens Crapper at 12:55 AM

"The NPS sought public input before construction begins, but have only heard from area residents and local fishermen, according to a Parks spokeswoman, Daphne Yun."

Well, let the gentrification of Rockaway Beach into some hipster enclave and luxury resort commence. Damn those who actually live there, those who fish there and have yearly visited the area to enjoy it.

Where was the concern from NPS when some energy corporation (Transatlantic) was laying down pipes in the ocean for the upcoming natural gas transfer? It was the only infrastructure development going on last year.

All those fucking stupid oblivious assholes who flocked to tilden last year in that elongated retard bus from williamsburgh, whether it was to see that art exhibit to take selfies with James Franco or to sunbathe and mince around nude had to notice those cranes just a few miles from the shore. They were there the whole season. But has with the preposterous interest in toxic areas by gowanus canal and ridgewood, it shouldn't be a surprise that the NPS has to pander to stupid free spending morons on what to do with the renovation of a section virtually destroyed by a hurricane 3 years ago.

It would have been helpful if the DNA.info would have included the suggestions by the residents parks dept. is blowing off in the article. I believe they are just part of the nexus involving media and government to remake NYC into some theme park for tourists and these carpet bagging dipshits.


I will surmise that some of the suggestions would be more of those ripoff food trucks, surely a cafe with wifi, and probably an arts center with a liquor license.

Rockaway, being the remotest part of Queens, stopped existing about fourty years ago. Nobody gives a damn about it anymore. The next hurricane might be the final developer.