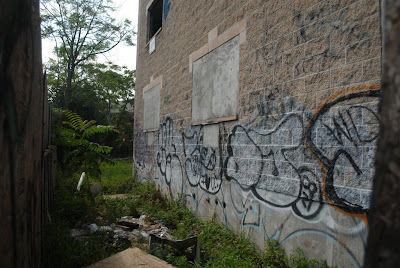 René Zupancic lives in fear of her neighbors.

“They throw everything out on the roof or out those windows. They throw used sanitary napkins along the road over here. They scream; they yell. They beat a dog up really really bad one time. They’re heroin users,” she said. “It’s terrible.”

On Cypress Avenue in Ridgewood, Zupancic and her brother live next door to an abandoned three-story building that a group of eight to 12 young squatters have claimed as their own.

For more than a year, she’s been forced to tolerate illegal neighbors who fight, drink, smell, shoot up and generally terrorize the neighborhood, she said.

Recently it’s gotten worse, she said, with the squatters getting more violent and rowdy, doing things like throwing a car mirror into oncoming traffic or abusing animals.

In desperation, Zupancic is reaching out to the local community board and anyone else who will listen.

Giordano said PSCH has abandoned the building and is in the process of getting it demolished but is held up in housing court. 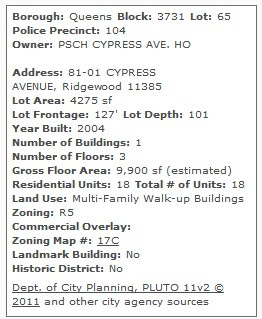 I know exactly where this is. I drive by it all the time. It is south of the railroad overpass on Cypress Avenue, which puts it in Glendale - not Ridgewood.

I think it's best to get the facts straight (and yes, I live in Glendale - I'm not exactly thrilled about owning up to having this thing in my neighborhood).

It is next door to Union Field Cemetery and across the street from Mt. Judah, which both have Ridgewood addresses. It's in Ridgewood. What a dumb thing to be concerned about.

I added a screenshot of the information from CityMap to put the location controversy to rest.

Remember when we were all lumped under Flushing? We survived.

The cemetery sold this property to PSCH. The cemetery address is Ridgewood, therefore the house is in Ridgewood. End of story.

Don't you think these comments would have been more appropriate on the post I put up about the zip code?

The whole city is like that. What is to do? Something only the federal gov can, but it does not want...Move out from the city!

"For more than a year, she’s been forced to tolerate illegal neighbors who fight, drink, smell, shoot up and generally terrorize the neighborhood, she said."


Sounds like the typical residents in the illegally subdivided 1 family houses that dot that cesspool of human scum, Ridgewood. I lived there for 2 horrid years. The incredibly loud booming sound systems playing reggaeton and xbox and movies all throughout the night with sub woofers blaring like it's webster hall. The ex cons, child molesters (check the map, it's molester central), bed bugs and scum landlords.

sounds like some of my neighbors minus the heroin use, lol. The quality of life in most Queens neighborhoods has been going down since the early 80's........

I used to live a few doors down from this address. The post office felt my address was in Ridgewood, but it is very close to both Glendale and Bushwick. Well, you guys can start the Cypress Avenue equivalent of the Shomrim and just beat the s**t out of them. LOL