Ackerman thinks his constituents are stupid 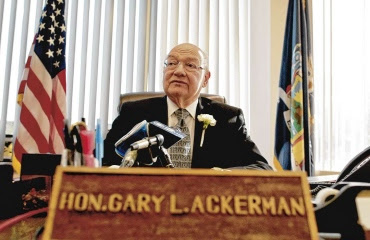 ACKERMAN: Your premise is that comity exists now. It may not be entirely accurate. It used to be you had real friends on the other side of the aisle. It’s not like that anymore.

Society has changed. The public is to blame as well. I think the people have gotten dumber. I don’t know that I would’ve said that out loud pre-my announcement that I was going to be leaving. [Laughter] But I think that’s true. I mean everything has changed.
Posted by Queens Crapper at 12:54 AM

comedian George Carlin agreed with Ackerman , when he said that ' THE PUBLIC SUCKS " would be his campaign slogan , if he ran for elective office.

We have had two decades of hate-filled propaganda on AM talk radio, a cynically biased Fox "News" and now, massive manipulation by shady characters operating anonymously thanks to that miserable Supreme Court decision.

We are seeing the results: paralysis and working people voting against their interests.

Ackerman has a point.

Yes, its all Rupert Murdoch's fault. You folks need to get a new line. The mainstream media has been manipulating the truth for decades. See any weekly local paper.

THey kept electing him over and over. The definition of insanity (And stupidity for that matter) Is doing the same thing over and over and expecting different results. You tell me if the stupid or insane.

I don't think the people reading and/or contributing to Queens Crap are stupid---unless you count the trolls. AND there are plenty of them because the truth hurts THEM!!!

Keep up the good work Crapper and continue to keep it real.

Wasn't Queens Crap the first place that outed Hackerman and started to expose his corruption? I guess he figured he'd retire now than face criminal charges and lose his fat government pension.

"Hate-filled propaganda on AM talk radio"

Hate-filled? Where's the "hate"? More like opposing views from the Liberal Orthodoxy.

Ackerman did the honorable thing. He couldn't stand the heat so he got out of the kitchen. (Plus his fat congressional pension and retirement peks.)

Both parties are statist garbage drek supporting a corrupt Federal Reserve Banking oligarchy that works in hand with the bought Federal government.

Der fetty needs to poomp up dose "peks". Yoof been fressing too much, Garee. Hahr-hahr!

i agree with Q.C. that the M.S.M is now and has been manipulating the current event news with a liberal slant and many lies and omissions, for many years in NYC.

the Queens weeklies are an arm of the liberal /progressive's agenda. although, i am waiting for the Bayside-Times -Ledger (News Corp. owned now ) to begin reporting with more balance and fairness.

with the recent entrance to the media of conservative, blogs, some talk radio and Fox News, current events are expressed with more balance.

the ratings express this fact.

i also feel that Q.C. has some biases which it is fearful of presenting to it's readers . but the citizens have a way of expressing these issues and voting for or against them at the ballot box. sadly some progressive social engineering issues never get on the ballot.

citizens must demand a voice on the ballot. electeds should never be allowed to be rewarded with campaign money,by special interest groups, for their vote. suppression leads to dictatorship.

last year at a civic candidates night, we were asked to write our questions to our congressional
candidates and the civic panel would read them.

all candidates (G.O.P.) etc. were questioned ,except Dem/Lib/Prog. Cong. Gary Ackerman. he was permitted to leave abruptly, after giving his stump speech.
i felt that the civic was protecting him from the members who wanted to discuss his reason for voting for the DEMOCRAT UN-AFFORDABLE HEALTH LAW .

Uh oh - sounds like Gramps is at it again.

Get it through your head - the Republicans are just as bad, if not worse.

Ackerman is a corrupt asshole, and everyone knows it, and I'm glad he's out. Hopefully, Lancman gets in, because he's the best of the bunch and will easily trounce Hollerin' Halloran, who deserves to go to jail, not Congress.

We all like to think we possess an above average intelligence.

Half of us are deluding ourselves.

"Ackerman thinks his constituents are stupid"

What arrogance! His constituents think Ackerman is stupid...now! I guess he woke up and realized he was unelectable. Serves his ass right!

"the ratings express this fact. "

The rating show "cume" that is a measurement of listeners who tune-in for atleast 5 minutes/week.

What they don't is demographics and that is what is killing right wing media.

WABC, WOR and Fox News -all- have the oldest listener-viewer age medians in their respective categories.

The new owners of WABC are about to turn it into a vanity outlet for their own syndicated programs. the reason is that their ratings are at historic lows and there is no chance of recovery. WOR, now takes payment for airing many shows.

sure they're stupid. they kept voting for him.

"Ackerman is a corrupt asshole, and everyone knows it, and I'm glad he's out. Hopefully, Lancman gets in, because he's the best of the bunch and will easily trounce Hollerin' Halloran, who deserves to go to jail, not Congress."

I have to say he is right for the most part. when I talk to my neighbors about their community, local problems, etc they are very un-caring and stupid. They don't even seem to want to know.


So who do you want then?

The daughter of a Chinese gangster who is only interested in legislations that affects Asian-Americans?

A woman who got into office solely on her cousin's name who is dumber than a bag full of hammers and has affairs with convicted union thugs?

Or an ethically bankrupt insane man who thinks that because he's the head of his own religion, he can do anything he wants and fuck over his constituents at will?

I'll take the smart and relatively normal one who has actually gotten significant legislation passed while in office, thank you very much.

the same social engineering CRAP will disintegrate the American society.

He doesn't look so good these days.

Let's see if G-d cares
how important Gary thought he was.

No Congressman...
you can't transfer your numbered bank accounts to the afterlife.