The plan for 5 Pointz 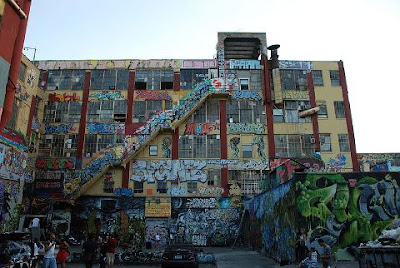 The 5 Pointz graffiti warehouse is likely to be demolished by September 2013 and replaced by two apartment buildings if the property owner’s plans are approved.

Last Wednesday, David Wolkoff, whose family owns the Long Island City property, attended a land use committee meeting at Community Board 2 in Woodside to provide an “information presentation” on the proposed development.

He told the committee that he planned to erect two residential towers that would contain 1,000 rental units. One tower would be 47 stories high, while the other 41 stories. As part of the development, there would be between 25,000 and 30,000 sqf. of retail space.

Wolkoff said that 55% to 60% of the rental units would be 1 bedroom apartments; 20% studios; and the balance, 2 bedroom or loft-style apartments. At this point, the apartments will be rented at market rate, which is at about $30 per sqf., Wolkoff said.

The development will include walls that graffiti artists can use to display their art and there will be a small number of artist studios.
Posted by Queens Crapper at 12:43 AM

Eyesore, the faster it comes down or is refurbed the better.
That cryptic sprayed on garbage is not art !
The roof is even covered. I get to see this crummy treat every July 4th LIRR/7 train going to the city to watch the fireworks.

Speaking of: Does Anybody know what river the fireworks are on this year ? Or is it strictly for West side & NJ tower people

Aerosol art my ass ROTFLMFAO.
These “street taggers” are fee to pool there own $$ and buy their own property (preferably up in Canada the Bronx or Jersy)
Problem is most don’t have a earned dollar or pot to piss in because nobody likes there so called “Aerosol art” but themselves. The word is actually an oxymoron like "rap music"

Putting a load a housing in place of that eyesore in will save countless historic small 1 and 2 family houses in LIC the wrecking ball.

Yes, Joe who comes into the city once a year from the suburbs for fireworks. Please continue to regale those of us who give a shit about the city with your very useful and totally valid viewpoints on what is and is not art. We are all totally interested. Thank goodness for the internet, or we would never have been introduced to such lucid criticism.

I live in what may be one of the last early 20th century freestanding buildings in this area and I think 5 Pointz actually DRAWS people to LIC instead of deterring them. Come on, this isn't the 'burbs, people actually want to live near this kind of stuff these days. It adds value to the area. However, if the owner wants to sell, it's their right and they've been more than generous. Sad to see it go though.

P.S. Although Joe and I might disagree on art, I agree with him 100% on the saving of old homes. That should be a priority. Without them, this place will look like LA (cringe).

"Does Anybody know what river the fireworks are on this year ? Or is it strictly for West side & NJ tower people"

The Walkoff family
is bullshitting as usual.

They just want to get their zoning variance secured...which increases the potential value of that property...so that they can borrow more money against it.

In this ruptured economy "big dreams" Jerry Wolkoff wont get his project off the ground for years to come.

This will be eating up most of this commercial slum lord's cash.

I don't live in Queens or even New York, but I did for two summers (2011 and 2012, in Brooklyn. One day i had taken the #7 to Queens and from the subway, i'd seen this incredible building. It turned out to be 5Pointz. I was amazed and decided i'd go down and see it. I went once more after that, and was even more amazed. In my opinion, the graffiti there is all works of art; the entire place is exceptionally unique and should be preserved. Why not have a museum of graffiti art for graffiti artists and fans like me and so many others? From what i've read, the site will be overbuilt, 5 times, according to the zoning there. How is that possible? The new proposal, as is, isn't even allowed without exceptions. I'd say, give 5Pointz first right of refusal to buy the building and keep just as it is. It's awesome.

Joe is an ignorant douche. I live next to five pointz in LIC and swing by often to admire the incredible art. I know a lot of people including myself would hate to see it go.

The new plan is for FIVE TIMES the permissible area to be used--and despite the massive overbuilding it includes NO low-cost housing; all market-value luxury housing in an area that sorely needs low-cost options. This is not "housing development." It is extortion and robbery that the community will pay the price for if it's approved.

I'm in favor of an international graffiti museum offering classes and fun events. What could be a better contribution to an already-artsy area of Queens?